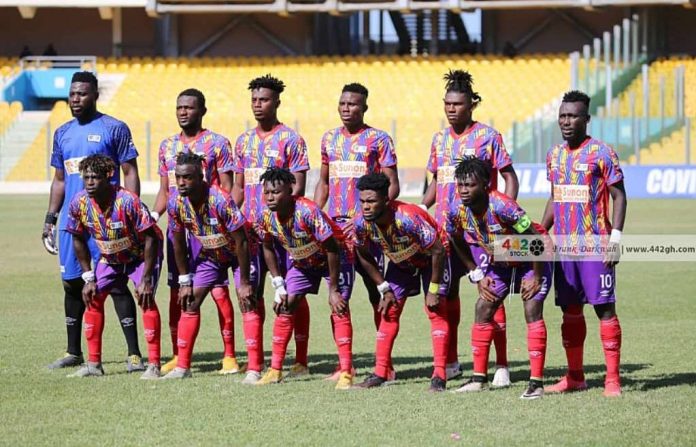 Premier League champions Accra Hearts of Oak SC returned to winning ways with a comfortable 2-0 win over Berekum Chelsea FC on Wednesday afternoon in Cape Coast with a brace from striker, Kofi Kordzi.

The bulky attacker grabbed his first brace of the ongoing 2021-22 Ghana Premier League season with a crucial two goals to help the defending league champions beat the Bibires in Cape Coast.

Hearts were the better side and dominated the opening exchanges of the encounter as they looked to bounce back to winning ways after drawing against Dreams FC last Sunday in Dawu.

William Denkyi found Kordzi inside the box on the 18th minute mark with a sweet pullback which saw the attacker connecting home with his left foot to find the back of the net to make it 1-0 to the home team.

The first ended 1-0 to the Oak Tree lads.

Chelsea started the second half on a blistering pace but goalkeeper Richmond Ayi denied them the equalizer with a top clash save to keep the score at 1-0.

Kordzi was at it again inside 53 minutes when he rised highest in the box to head home the second goal following another cross from Denkyi to make it 2-0 to Hearts.

The Rainbow Boys then controlled the Tempo of the match to record their third win of the season.

Hearts now move ninth position on the league table after 8 games with 13 points and two games in hand.