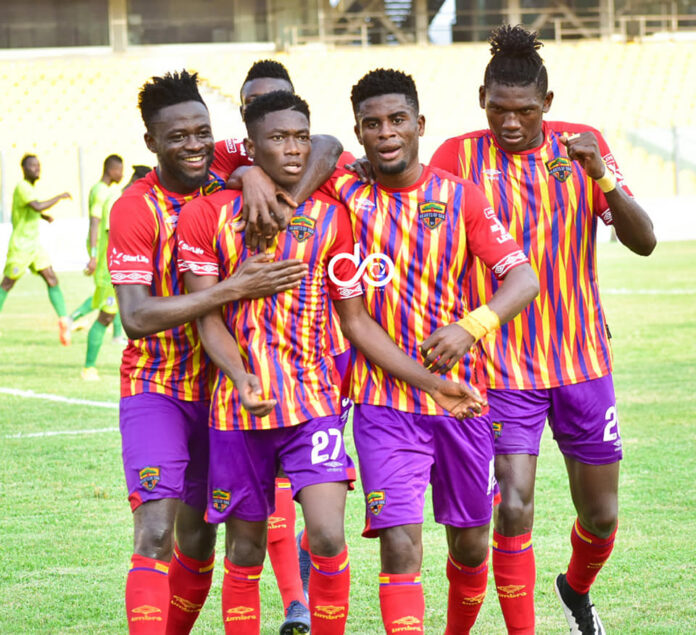 Hearts of Oak won their third successive home game for the first time in the 2020-21 Ghana Premier League on Sunday evening against Techiman XI Wonders in Accra.

The high spirited Phobians returned to the Accra Sports Stadium for the first after walloping Bechem United FC 6-1 in their week seven clash to record the biggest win in the league so far.

Hearts begun the game in a high spirit and started firing from all cylinders very early in the game with some wonderful football on display to please their fans who returned to the stadium after restrictions on fans were reduced by the Ghana government.

Eleven minutes after the kick off, Abdul Umar Manaf connected beautifully to captain Fatawu Mohammed’s inch perfect cross to give the Rainbow team a deserving lead.

Three minutes after the break, strike Victor Aidoo received a pass from Manaf outside the box of the opposing team to unleash a pile driver from distance to grab the second goal to put the hosts in a 2-0 lead.

Hearts held onto the two-goals advantage to pick their fourth win of the season and their third successive wins at home after beating Dreams FC 3-0 and 6-1 win over Bechem United in the two previous home matches.

Hearts 2-0 win over Wonders on Sunday evening takes them to fourth on the League table with 15 points from nine matches.