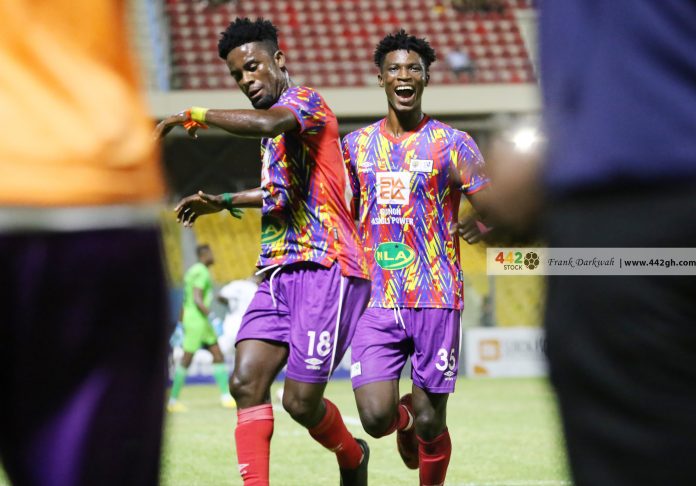 The Rainbow Boys, on the balance of play deserves their narrow win at home over the visitors grab their second win of the second round of the 2021-22 season.

Hearts of Oak started the game as they intended and pushed Ashantigold back with high pressing and good football on display.

But as usual, their strikers were wasteful upfront and failed to punish the Miners who looked fragiled at the back at the start of the match.

The home team were awarded a spot kick which looked a bit harsh on the away team around the 14th minute mark.

Former Ghana U-20 starman and captain, Daniel Afriyie Barnieh stepped up and converted the penalty kick to give the home team the lead they so badly needed to settle nerves.

Ten minutes later, Aminu Adams pounced on a loose defending from the host to head home the equalizer from the center of the box into the bottom left corner.

Ashantigold took over and dominated the match after leveling matters with sweet passing games in the middle of the field but never really threatened the back line of Hearts.

The Phobians regained control of the match and started invading Ashantigold Gold’s territories.

Sulley Muntari’s ball into the path Kordzi was initially miscontrolled by the striker who later found his feet to slid the ball into the Afriyie Barnieh’s path.

The opening goal scorer, Barnieh unleashed a wonderful strike into the top right corner to snatch all three points for the Phobians who are way behind the top spot occupied by rivals, Kumasi Asante Kotoko SC.

Ashantigold ccame strongly in the last 15 minutes of the match and caused a lot of problems for the Phobians defense who were saved by captain Mohammed Alhassan.

Ghana llegend Sulley Ali Muntari saw 80 minutes of the match and once again showed his class with pinpoint passes and controled the game from the middle for the Phobians.

Dennis Nkrumah Korsah, the former Cape Coast Mysterious Ebusua Dwarfs captain nearly gave away a goal when Opoku Agyemang beat him to the race for the ball in the dying embers but later redeemed himself with a vital block.

Ashantigold ggot good opportunities in the last minutes but failed to utilized their chances as they succumbed to a 2-1 defeat at the Accra Sports Stadium for the first time in eight years.

The 32020-21 Ghana Premier League and MTN FA Cup winners, Hearts of Oak SC will travel to Berekum to face Berekum Chelsea FC in their next match at the Golden City Park.

Harruna Attah writes: What is this koraa?!

Five picked up over lynching of 90-year-old ‘witch’