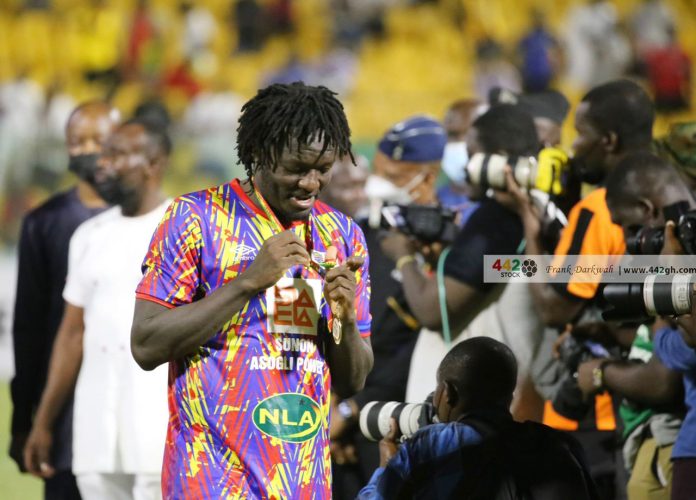 The Phobians beat the Porcupine Warriors 2-1 on Friday evening to lift the covetous 2022 President’s Cup to break the hearts of the supporters of the Kumasi-based club.

Muntari was one of the best performers in the match as he stamped his authority in the game in the 80 minutes he spent on the field with jaw-breaking display and pinpoint passes.

Before the game, the Accra-based club had gone five matches without a victory which coincide with the signing of the former AC Milan and Inter Milan star.

Hearts have drawn four games and loss once in the last five games after the signing of the UEFA Champions League winner.

On Friday December 4,the narrative changed as Daniel Afriyie Barnieh and Patrick Razak scored to help the Phobians win their first match in six matches since Muntari joined.

Though the Phobians beat Kotoko to gain bragging right and a new trophy in their trophy cabinet, the Ghana legend would be hoping to end the five games winless run in the ongoing 2021-22 Ghana Premier League season.

Sulley Muntari was one of the most influential players in the game and played 80 minutes in Hearts win over Kotoko.