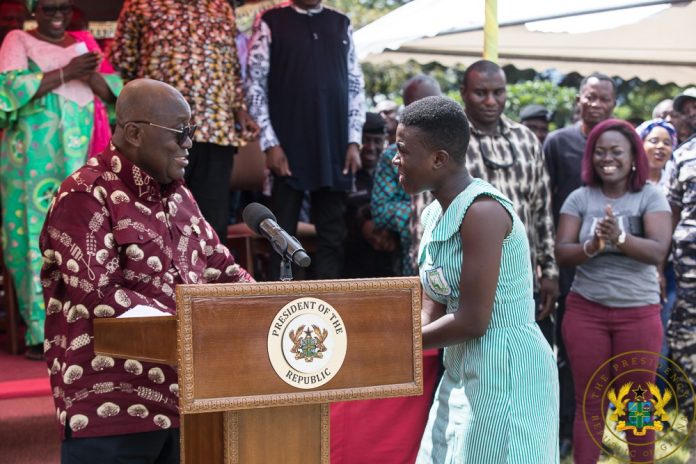 Ghanaian leader Nana Addo Dankwa Akufo-Addo says the educational investment being made in Ghana’s children is vital for the future of the country.

According to President Akufo-Addo, the development of the country’s human capital is what will enable Ghana transition from her current state into one of progress and prosperity, and thereby lift the standard of living of every Ghanaian.

Speaking at an interaction with members of staff and students of Mawuli Senior High School on Tuesday, 5th November, 2019, the 2nd day of his 2-day working visit to the Volta Region, the President indicated that prior him coming into office, an average of 100,000 children, annually, could not transition from Junior High School into Senior High School because of financial constraints.

“We couldn’t progress as a nation if we continued the hemorrhage of our human capital. 100,000 on the average every year for over ten years, one million young Ghanaians would grow up with the knowledge that they have at the Junior High school level and that’s it? That’s no way our future could be bright,” he said.

That’s why, the President noted, that his government took the decision “right from the beginning of our administration that we were going to change the direction of our country, we were going to change the educational policy of our country and bring in the Free Senior High School, so that those 100,000 that could not be captured in Senior High, now they are captured.”

With 1.2 million students currently in Senior High schools across the country, 400,000 more than the total number of students enrolled before the onset of Free SHS, this is the highest number of Ghanaian youths in SHS.

With the Free SHS policy being financed by the country’s oil revenues, he stated that “I don’t have any regrets whatsoever about committing the oil revenues of our country to preparing our nation for the future. It is the best, most efficient, most equitable way all of us can participate in those revenues.”

President Akufo-Addo stressed that the oil revenues “are not there, sitting there, waiting for politicians like me to come and put their hands in oil revenues in their pockets, no. It is being used to prepare our nation for the future of our country. That’s the best way we can use the oil revenues.”
Knowledge and technology, according to the President, are what will determine the fate of nations in the 21st century.

“My modest contribution to the growth of Ghana is to make sure that we are not left out of the progress that is ahead of us in the 21st century,” he added.

To those who “who feel that their political fortunes are threatened by the Free Senior High School”, the President bemoaned the fact that “we have such politicians in Ghana. But that’s our lots. We will deal with it, that’s not a problem, we will deal with it.”

Additionally, to the headmasters and other principals trying to undermine the programme, President Akufo-Addo stated that “I can tell them that they will not succeed. They will not stand in the way of the future of our nation.”

Make use of Free SHS

The President urged the students of Mawuli SHS to make maximum use of their time in school, and equip themselves not only with classroom knowledge, but also with general knowledge.

With the first batch of Free SHS beneficiaries set to write the WASSCE next year, “the eyes of the world will be on you. Make sure that you shame all the detractors of the Free Senior High School policy. I am confident that the young men and women I see here in Mawuli are going to rise to the challenge and shame the people who said that Free Senior High School is not a good idea.”

Ghana FDA has not approved hydrogen peroxide for COVID-19 treatment –...