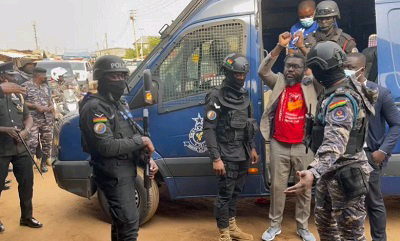 The FixTheCountry Movement lead Convener Oliver Barker-Vormawor has told the High Court in Accra that “I’m prepared to stand trial.”

Oliver Barker-Vormawor, who was in court on Monday when his lawyers moved a bail application on his behalf, told the court presided over by Justice Daniel Mensah that he is in “good health.”

Oliver Barker-Vormawor has since February 11 been in detention and charged for treason felony.

In court on Monday, March 14, 2022, Oliver told the court he hope “they (prosecution) take the matter up for trial.”

In a near-two-hour court sitting, lawyers of the applicant (Oliver Barker-Vormawor) led by Akoto Ampaw moved the bail application for consideration.

He argued that though the said comments by his client could be deemed “reckless and condemnable,” the criterion for such a charge has not been met.

He said, the ingredients of Mens Rea and Actus Rea have not been met to show that the applicant has “prepared” or shown “endeavour” to carry out his comments which were conditional in nature.

He also argued that the prosecution is jumping the gun and what the police could have done was to monitor him closely when he made that “youthful exuberant and empty talk” to see if he has the capacity to stage a coup.

He argued that the accused has a fixed place of abode, persons with independent substance to stand sureties for him and is ready to avail himself to stand trial.

Counsel also accused one Anastasia Karimu, the State Attorney who deposed to the affidavit in opposition to the bail of having “little knowledge of what the issues have been.”

Hilda Craig, a Senior State Attorney while opposing the bail said, though they admitted that by Martin Kpebu vs Attorney-General No.2, all offences are bailable, yet certain conditions ought to be met.

She said, the applicant has demonstrated that he has intent based on his post that he is intended to carry on his intention.

She argued that, the applicant following his post, came down to Ghana to prepare and carry his intention and so when granted bail, will not avail himself.

She also argued that, the applicant has no fixed of abode and that he is a “lodger with people.”

The State Attorney also told the court that, the accused has been “intolerant and abusive in custody” but the court said, such was part of their deposition and the court cannot put it on records.

On the issue regarding Anastasia Karimu not having sufficient knowledge to depose to the affidavit, she argued that, the AG works with the police and what came to her knowledge is what was deposed to.

She said there has not been unreasonable delay in the case wnd prayer for the application to be dismissed.

My mind is made up

Justice Daniel Mensah, after hearing the parties said the court’s mind is made up but will need time to make a detailed ruling.

According to EIB Network’s Court Correspondent, Oliver Barker Vormawor is expected to appear before the Ashaiman District Court on Tuesday, March 15.

Oliver Barker-Vormawor has been charged with treason felony and has since February 11 been in detention.