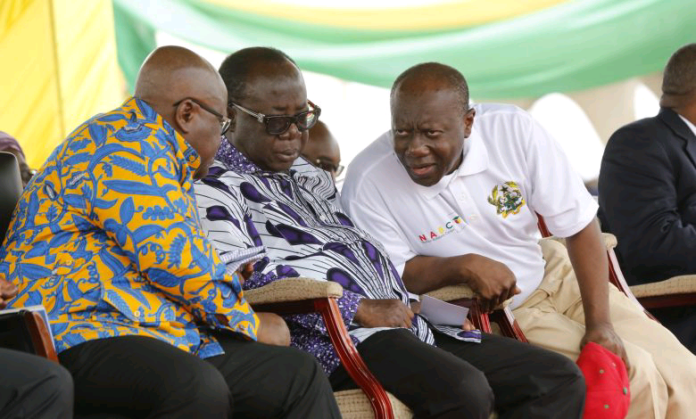 The pressure group, OccupyGhana, has lashed out at the government for seeking IMF support at a time Ghana’s public finances have taken a severe hit as a result of the pandemic and the war in Ukraine.

President Nana Addo Dankwa Akufo-Addo defended his government’s decision to go to the IMF on Thursday, saying all countries around the world are working to return themselves to a state of normalcy following the devastating impact of the pandemic of COVID-19, whose effects have been exacerbated by the Russian invasion of Ukraine.

“Economies have been plunged into recessions, businesses have collapsed, and lives and livelihoods have been disrupted. Food and fuel prices have escalated dramatically, as global and domestic inflationary pressures mount. Hopefully, sooner rather than later, the world will make up on lost time,” the president said.

“In our case, we have decided to seek the collaboration of the International Monetary Fund (IMF) to repair, in the short run, our public finances, which have taken a severe hit in very recent times as a result, whilst we continue to work on the medium to long-term structural changes that are at the heart of our goal of creating a Ghana Beyond Aid, that is building a resilient, robust Ghanaian economy.”

However, in a statement on Friday (8 July 2022), OccupyGhana said officials have failed to prevent losses and thefts at the public sector, a situation it argued has led the country to the Fund.

“That is why this return to the IMF for a ‘paltry’ US$2 billion leaves a bitter taste in our mouths. We would not be submitting ourselves to this forced and humiliating ‘Ghana [is not yet] beyond aid’ position if we had prevented the losses and thefts in the first place. In the second place, we would not be here if we had taken the simple steps of recovering the monies lost and stolen.

“How credible is this return to the IMF, when the monies we seek, sit comfortably in the bank accounts and pockets of those who caused us to lose the monies or who stole our monies?” OccupyGhana said in the statement.

Like almost all Ghanaians, it had been blindingly obvious to us for a while that the Government would have to return to the IMF. Yet, not even that foreknowledge could describe the disappointment when Government made the formal announcement.

This return is spectacularly remarkable because it is after we boldly announced the ‘Ghana Without Aid’ aspiration.

When the 2018 Fiscal Responsibility Act was passed, we were concerned whether that Act would indeed impose the kind of fiscal responsibility and discipline that Ghana needed. We therefore wrote a detailed letter to the Finance Minister on 29 January 2019, to inquire which steps were being taken to ensure that there was real control of excessive government expenditure. We received neither a response nor even a simple acknowledgement of receipt.

It was clear to everyone that the E-Levy was not going to be the panacea to Ghana’s problem. We issued a press statement on 15 February 2022, in which we questioned the loftily utopian expectations, and stated that ‘the e-levy will be meaningless until it is linked with (1) the total implementation of our income tax laws, (2) absolute commitment to recovering our misused monies, and (3) complete fiscal transparency and accountability.’ Although we delivered copies of the statement to both the Executive and Parliament, that was also ignored.

Why do we need IMF support?

We have noted from the statement of the Information Minister, that Ghana would be seeking about $2B from the IMF. $2B is roughly ₡16B. Is that ALL we need to tide us over the mess that we find ourselves in? And do we have to go scurrying to the IMF to provide that, when from the Auditor-General’s Reports, calculated from 2016 to 2020, the amount of monies lost or stolen is ₡47,945,579,875? In dollar terms, that is almost three times the $2B we are going for.

Clearly, we would not need the IMF if the government was serious about recovering these lost and stolen monies, and then plugging the holes that allowed them to be lost or stolen in the first place.

Mercifully, the framers of our Constitution had sufficient foresight on these matters and therefore entrusted the Auditor-General to, beyond merely conducting audits and producing journalistic reports, disallow wrongful expenditure and surcharge people who either cause losses or steal our monies.

Also, the 2000 Audit Service Act specifically empowered the Attorney-General to take legal action to recover the monies, where the persons surcharged do not pay after 60 days.

Yet, for almost 25 years after the Constitution came into force, these fine laws simply adorned the pages of our statute books, and neither the government nor the Auditor-General took any step to enforce them.

What we were subjected to was the annual charade where the Auditor-General issued lame and tame Reports, did no disallowance or surcharge, and then passed the baton to Parliament’s inaptly named Public Accounts Committee to continue the charade with televised hearings that did not recover a pesewa of the lost or stolen funds.

It had to take OccupyGhana, formed only in 2014, to go to the Supreme Court to teach the Auditor-General how to read and understand the simple powers that the Constitution had vested in that office. Thankfully, the judiciary in June 2017, threw out all the defences that the government put up against our case, including the insultingly fatuous and risible objection that we did not have the capacity to take the government to court. The judiciary also ignored the blatantly false claim by the then Auditor-General that its Management Letters constituted the disallowances and surcharges that the Constitution demanded.

Ghana’s judiciary stood up for Ghana when it unanimously ordered both the Auditor-General and the Attorney-General to do what is mandatorily required of them by both the Constitution and the Audit Service Act.

As if by divine providence, this development coincided with the appointment of a new Auditor-General who was prepared to act on the judgment. As the President acknowledged in his 2015 State of the Nation Address, the first act of disallowance by the Auditor-General stopped the potential theft of ₡5.4B (which at that date was roughly $1B) by public officials. And as the Vice President acknowledged in a speech during a Town Hall Meeting on 3 April 2019, the Auditor-General had by that date issued disallowance and surcharge certificates in excess of ₡500M and succeeded in recovering almost ₡70M in lost or stolen funds.

Although not a single public official or other person got prosecuted for any of these, the pleasing aspects of these developments in Ghana caught the eye of the World Bank. In its 2020 GLOBAL REPORT, titled “Enhancing Government effectiveness and transparency: The fight against corruption”, the World Bank proudly mentioned the June 2017 OccupyGhana judgment and stated that these achievements in Ghana had inspired the enactment of ‘similar legislation on disallowances and surcharges’ elsewhere. We know that Uganda, Sierra Leone, Kenya, Zambia and South Africa, have passed laws that take inspiration from our disallowance and surcharge laws.

However, Ghana’s role as the poster child in this matter was to suffer a severe jolt with the government’s shenanigans that forced the immediate past Auditor-General out of office. Two cases filed around the same time to determine the extent of the Auditor-General’s independence as provided under the Constitution, have simply stalled. They are not being listed for hearing, despite considerable pressure from civil society.

Return of the Charade

The result is that the charade has returned. The current Auditor-General is clearly scared to exercise the disallowance and surcharge powers. After months of pressure from OccupyGhana, the Auditor-General now claims that he has issued just ONE surcharge since the 2018 Reports were published.

His weak explanation is that after he issues his Reports listing the losses and thefts, he then investigates to gather evidence for surcharging. If the Auditor-General is now gathering evidence, then on what basis did he issue the Reports in the first place? It is only in Ghana that the cart can pull the horse and the tail can wag the dog in such a brazenly inexplicable manner.

The Attorney-General is not left out in this charade. Apart from being required by law and the Supreme Court to take steps to recover the lost and stolen monies, he is required by the 2016 Public Financial Management Act to submit reports on these steps.

However, he has ignored all our requests for information (spanning a full year) on whether he has prepared and submitted these reports, finally compelling us to file a petition against him with the Right to Information Commission on 30 June 2022. We await the Commission’s ruling.

That is why this return to the IMF for a ‘paltry’ $2B leaves a bitter taste in our mouths. We would not be submitting ourselves to this forced and humiliating ‘Ghana [is not yet] beyond aid’ position if we had prevented the losses and thefts in the first place. In the second place, we would not be here if we had taken the simple steps of recovering the monies lost and stolen.

How credible is this return to the IMF, when the monies we seek, sit comfortably in the bank accounts and pockets of those who caused us to lose the monies or who stole our monies?

We strongly demand that the Auditor-General immediately resumes disallowances and surcharges.

We strongly demand that the Attorney-General enforces the disallowances and surcharges, including taking criminal action, as also demanded by the Supreme Court.

A nation that will not prevent or recover its lost and stolen monies, will keep making return trips to the IMF.

Yours in the service of God and Country,