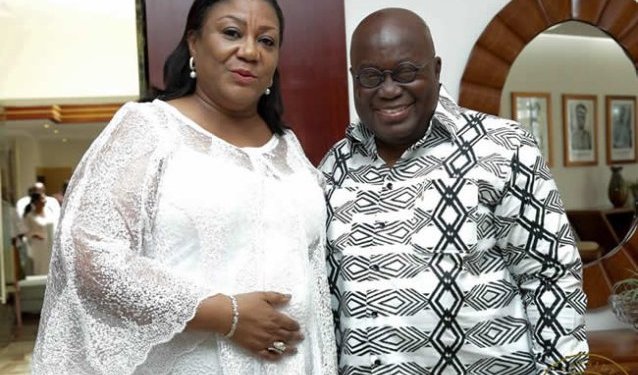 In what is perhaps the sweetest love message yet, the First Lady of the Republic, H.E. Rebecca Akufo-Addo, has described her husband, President Nana Addo Dankwa Akufo-Addo, as “a man whose faith in the goodness of this country is unwavering.”

In a period of heated political campaigning, the message of Mrs Akufo-Addo reminiscing her young age while recounting her journey into becoming First Lady delves such a soft, and endearing touch to even stone-cold hearts.

In this letter, the First Lady takes a little tour of her old photo album looking at herself from 49 years ago and recounting the thoughts that run through her young mind then. She describes herself, the 20-year-old Rebecca Griffiths-Randolph as “unassuming, coy, and bustling in post-teenage fickleness” unknown to her what future lied ahead and with no thoughts that “she would be married to a President.”

The love shared between the First Couple is narrated with such depth of mutual admiration as to encourage all young women to find their own showboys. But it is not lost on H.E. Rebecca Akufo-Addo that if you fell in love with a man who loved his nation as much, you would be forced to share him with the rest of the nation. With sheer generosity she kindly concedes that “it’s a reality a 69-year-old Rebecca Akufo-Addo has had to get used to – that if you marry a man whose heart beats for his nation, yours must beat for it too.”

For many of us, we do not know the man Nana Addo Dankwa Akufo-Addo beyond the resolute, charismatic politician that he is. If you grew up watching him on political platforms; from the 80s or even 2000s, you probably would never know him beyond the image of the fearsome lawyer, human rights advocate and fluent-speaking ‘brofo’ man. But he’s far more than that. Here is a man the gorgeous, kind and loving Rebecca Akufo-Addo ‘‘feels privileged to see a much closer view of’’, ‘‘a man who cares more about keeping his promises’’. And if you thought President Akufo-Addo practiced politics of no convictions then you are wrong. Mrs Rebecca Akufo-Addo writes again that: ‘‘indeed, many of the things Nana talks about and has achieved these last four years are things he’s talked about ever since I’ve known and been married to him’’. Well at least we, even from so far away, know about Free SHS.

It is not in doubt that H.E. Rebecca Akufo-Addo has brought such grace and prestige to the Office of the First Lady. The 69-year-old Mama Becky is going stronger and continues to be an inspiration to young women the world over, as one who finds purpose in a shared relationship founded on love and mutual respect. Her industriousness and commitment to the health of women and children is admirable. For the first time, Ghanaians voted for a President and had for a bonus of a wife who not only knows how to love but also how to work as hard in support of a dear husband and in the interest of her nation as well.

Rebecca Akufo-Addo truly knows how to do it. And she appeals to the nation to commit President Akufo-Addo to another four years; we should hear her solemnness and candour and give Nana Addo 4MoreToDoMore. Because who doesn’t love a good love story?