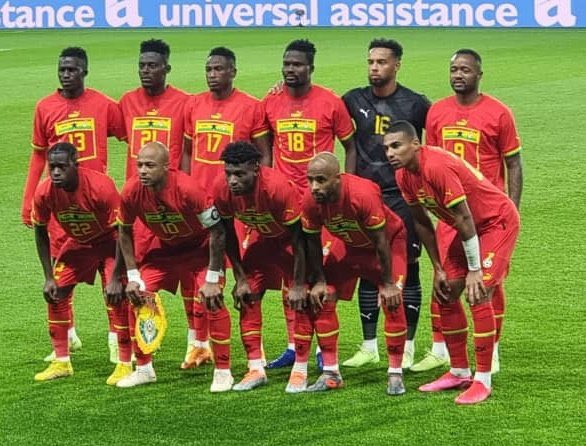 Ghana’s Black Stars have been beaten to a pulp by the Seleção of Brazil in an international friendly game in France on Friday evening.

The Ghanaian team looked very timid in the first half and allowed Brazil to dominate the game from the blast of the referees whistle.

Ghana were too slow in build and were very sloppy as they gave away possession with ease to the best team in the world and got punished for the lackadaisical attitude.

The Black Stars team barely got a chance to shoot at goal as the Brazilian goalkeeper Alison Becker was left on a holiday in goal.

English Premier League side Hotspur striker, Richardlison was presented with an early opportunity to score but he fluffed his lines in the early stages of the match.

Few minutes later, Felix Afena Ohene-Gyan was put through on goal by Dennis Odoi but the youngster sent in a tame effort on goal against the run of play.

Inside the ninth minute mark, Paris St Germain Captain Marquinhos opened the scoring with a free header into the center of the net following a corner kick.

Richarlison finally got his goal with a swift finish on the 28th minute mark to make it 2-0 to the Brazilians.

Eleven minutes later, Richarlison was on a hat-trick as he grabbed his brace from a free-kick well delivered by Neymar six minutes to the end of the match.

After the break, Coach Otto Addo made two changes as Felix Afena Ohene-Gyan and Kamaldeen Sulemana were replaced by Mohammed Salisu and Inaki Williams for their debut.

Ghana grew in confidence and started attacking Brazil with Inaki Williams threatening the goal area of the five-time World Champions.

Later in the game, Tariq Lamptey was handed his debut as he came on to replaced Odoi in the second half.

Ghana’s first choice goalkeeper Jojo Wollacott made two crucial saves in the second half to deny the Brazil from scoring more goals in the second.

Ghana will play Nicaragua in their second game in Spain on Tuesday evening.