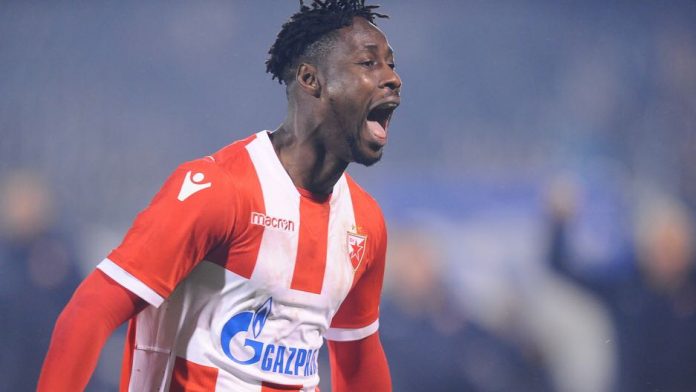 Red Star Belgrade tops man Richmond Boakye-Yiadom is on the radars of seven-time Uefa Champions League winners AC Milan and Serie A side AS Roma, according to ClubCall.com.

According to reports in Serbia, representatives from both clubs were in attendance at the Stadion Rajko Mitic for the Champions League group B encounter between the Serbians Red Star Belgrade and Greece side Olympiacos as the home side came from a goal down to emerge 3-1 victors.

Reports have it that scouts including Ghanaian agent Oliver Arthur were also at the stadium when the Ghanaian attacker came on as a second half sub to put the nail on the coffin for his side with a 90th minute header to make it 3-1 to the home side.

The Black Stars attacker has 13 goals in 18 games to his credit for the Serbian giants in his second spell at the club following his previous loan deal.

Meanwhile, reports in Italy has intensified due to the fact that the in-form striker speaks fluent Italian and would not have any difficulty due to his past experience with Sassuolo and Latina in the Serie B and his short stint with Serie A outfits Atalanta and Genoa respectively.

The 26-year-old is valued at €3m by transfermarkt.

The striker’s agent spoke to the media after the game: “The interest in the player from both clubs exists and its important he continues with his fine form by proving his qualities and abilities continuously and the deadline will be in January then we will be able to talk about the next stage.”