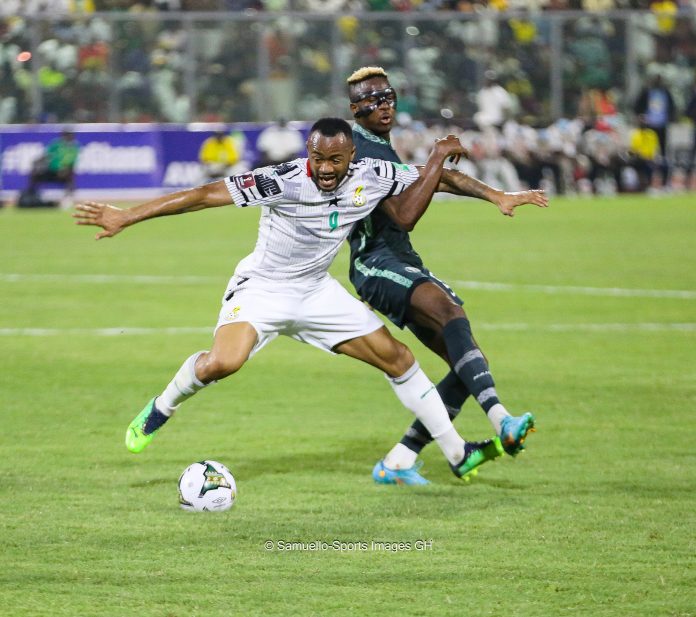 Despite the fact that Ayew was booed by some section of Ghanaian supporters after he was substituted late in the Black Stars goalless game against Nigeria in 2022 World Cup playoff at the Baba Yara Sports Stadium yesterday, Otto Addo believes he did very well.

Talking to the Media after the crunch encounter, the interim Ghana boss Otto Addo believed the player was exceptional in the game especially in the first half.

“The booing I think is for me, no problem. I think it’s normal, Jordan [Ayew] played well, had a very good performance, especially in the first half.”

“A lot of one against ones… at the end. I don’t know if they don’t see it but he was tired and what they might not know… we watch a lot of matches, me and my squad… and I think we know what each of them is capable of,” said Addo.

Jordan only joined the Black Stars camp in Kumasi on Wednesday due to coronavirus issues.

He remained a doubt for the game after news came that he has contracted the devastating disease in England.

The 30-year old tested negative of the virus in a final test and had to join the Black Stars camp a day before the Nigeria game on Friday.

He took part in one training session with the team but played ninety minutes in the Nigeria game as a winger instead as an arrow head.

Meanwhile, Ghana will be traveling to Nigeria for the second leg of the playoff at the Moshood Abiola Sports Stadium in Abuja on Tuesday, March 29, 2022.

A win or a scoring draw will automatically qualify Ghana to the 2022 FIFA World Cup in Qatar at the expense of Nigeria who are seeking for a seventh appearance at the mundial.

You need a refresher course in economics – Adongo jabs Bawumia