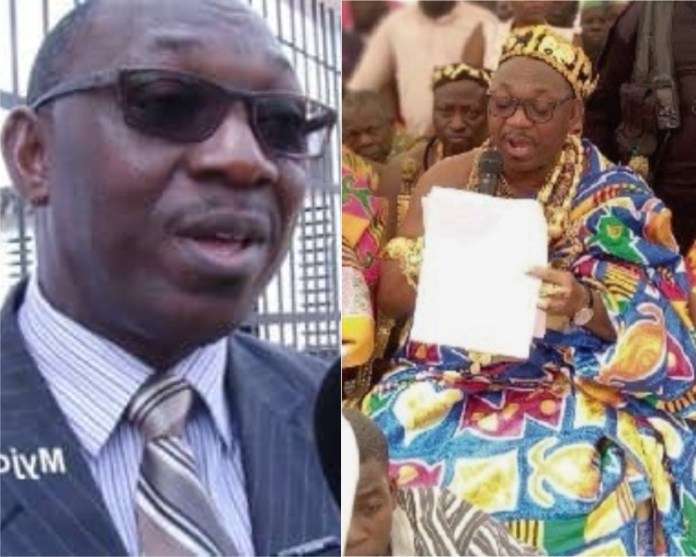 The trial of former COCOBOD boss, Dr. Stephen Opuni and businessman Seidu Agongo has been put on hold following the filing of a motion to get the trial judge changed.

Counsel for Dr. Opuni, Samuel Cudjoe has filed a motion for the judge, Justice Clemence Jackson Honyenuga, to recuse himself for stated reasons.

When the court reconvened on Tuesday, March 3, 2020, for lawyers for Seido Agongo to continue cross-examination of Dr Yaw Adu Ampomah, lawyer Cudjoe drew the attention of the court to the pending motion.

Justice Clemence Honyenuga has come under the spotlight recently, receiving avalanche of criticism on social media and from some lawyers after video of him endorsing President Akufo-Addo for a second term went viral.

Speaking in his capacity as the Paramount Chief of the Nyagbo Traditional Area, Justice Honyenuga scored the president “excellent” and hoped he is retained in the December general elections.

“We wish to congratulate you for the excellent manner you are governing this dear country of ours, it is our hope that with your vision and the gains made in your first term, Ghanaians may consider giving you another four years” Justice Honyenuga whose stool name is Torgbui Ashui Nyagasi V, told the president at a durbar of chiefs and people of Nyagbo. The president was on a three-day tour to the Volta/Oti regions in February.

A law professor, Stephen Kwaku Asare, who is also a D&D Fellow in Public Law and Justice at Centre for Democratic Development (CDD-Ghana) said the utterances of Justice Honyenuga violate the code of conduct for judges as well as that for chiefs.

Interestingly, the name of Justice Honyenuga, who is an Appeal’s Court judge sitting as an additional High Court judge, has come up strongly as one of three persons that government has recommended for promotion to the Supreme Court.

The ongoing trial of Dr. Opuni has been cited by the government on several platforms as its resolve to prosecute corrupt officials under the previous administration.

Since the Opuni’s case is seen as a political trial, a lawyer who does not want to be named told 3news.com the decision to get Justice Honyenuga removed is apt following his apparent show of support for the president, adding his impending promotion by the president may have effect on the case before him.

Without going into the merits of the motion, Mr Cudjoe on Tuesday prayed the court to stay proceedings until the determination of the motion on March 16, 2020.

According to him, the effect of continuing the case without hearing the motion will be tantamount to predetermining the application.

In her opposition, Principal State Attorney Stella Ohene Appiah said: “My Lord like you rightly hinted, we are also of the view that counsel should have petitioned the Chief Justice rather than coming with a motion. My lord, the motion on its own does not warrant a stay of proceedings and so doesn’t prohibit you from doing your work”.

She added “So my lord, the mere fact of an application pending on the 16th of March does not in any way prevent you from continuing with the case unless it is determined and an express ruling or decision is taken on it to prevent you from sitting on the case. Besides we have three accused persons before this court. The applicant did his cross-examination over six months and after he has had his turn, and A2 and A3 are now cross-examining almost at the tail end of their cross-examination and the applicant is seeking to remove the sitting judge. My lord, it is so unfair to A2 and A3 and very unfair to the prosecution”.

But Mr Cudjoe said the prosecution’s stance was ill-informed as they “have not read the motion paper and affidavit”.

“An important issue has been raised, the court should still go ahead with the hearing,” he wondered, “the effect of not hearing will be to pre-determine the application before it is even heard.”

Mr. Cudjoe was emphatic that once an objection has been raised, it needs to be heard before the case continues and it doesn’t lie in the prosecution’s domain to state that the court should still go ahead with the hearing.
Meanwhile, counsel for the second and third accused persons, Nutifafa Nutsukpui who was holding brief for Benson Nutsukpui said “we have been served with a copy of the application and we would add on that we deem it fit and proper that the court does consider the application before proceeding any further only because the guiding principle of the delivery of justice in our jurisdiction is that not only must the court do justice, but the appearance of it and how that is seen is principal and it is often said that it must be manifestly seen to be that”.

Finally, Justice Honyenuga ruled: “It is my candid opinion that since an objection is being raised, l the trial judge, hearing this matter, it is in the interest of justice that the objection whether rightly or wrongly be heard before the case proceeds. I am not oblivious of the delay in the trial of this case. Consequently, I would adjourn this case to the 16th of March 2020, when the motion will be heard”.

Meanwhile, there is already a motion at the Appeal’s Court to quash a decision of the judge to defer hearing of a perjury case brought against prosecution witness, Dr. Yaw Adu-Ampomah. There is also a request to get a different judge to sit on the perjury case.