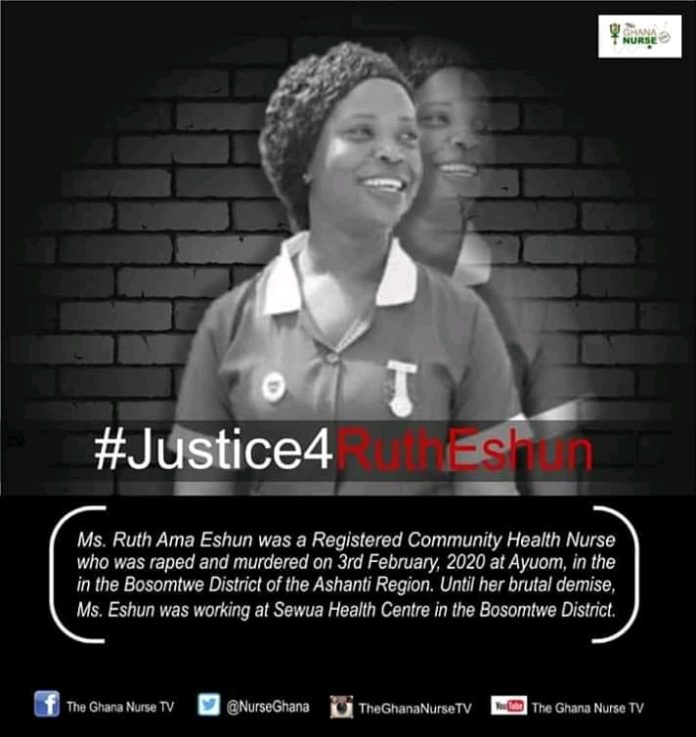 Social media users across Ghana are hoping to use their power in getting justice for a 30-year-old nurse who was murdered by unknown assailants at Ayuom near Kumasi in the Ashanti Region.

Ruth Ama Eshun was spotted leaving Sewua Health Center —located in the Bosomtwe District where she worked —at about 3pm on Monday, February 3, 2020.

But alarm was raised after she failed to return home — and was reported missing by her worried husband.

She was, however, discovered lifeless the following morning at about 100 meters from her home.

Though police in the Ashanti Region are yet to give full details on the matter, many believe that the young nurse may have been gang-raped and murdered by her assailants.

The development has set social media alight as many Ghanaians continue to push for justice for the health worker.

The Ghana Registered Nurses and Midwives’ Association which has also joined the campaign, condemned the act, describing it as “inhumane”.

In a statement dated February 7, and sighted by Dailymailgh, the Association appealed “to the Ghana Police Service to investigate this matter with the urgency it deserves and bring the perpetrators to book”.

It also urged members of the Association to remain calm “as we liaise with our Ashanti Regional Executives and the security Agencies to bring justice to the family”.

“We request that our Employers, the Ministry of Health and its agencies to ensure the safety of Nurses and Midwives working in all parts of the country especially the hard to reach areas”, the statement further appealed.