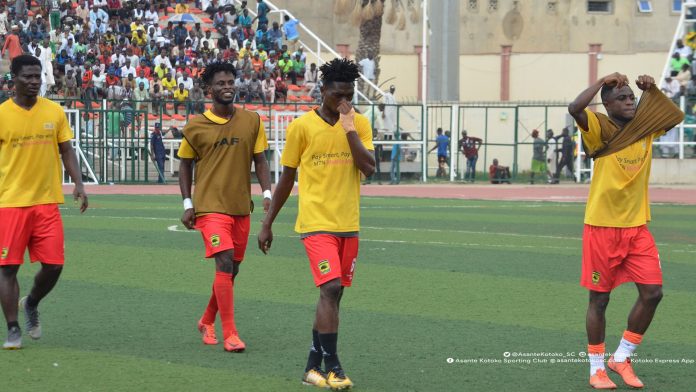 Asante Kotoko succumbed to pressure from Kano Pillars in a game which ended 3-2 in favor of the Nigerians on Saturday.

The Porcupine Warriors conceded an early goal on the 13th minutes after Pillars attacker Hillary Paul overcame Ayiku Tetteh’s tackle to hit a low shot into the far post from inside the penalty box.

Kotoko restored parity after Justice Blay kept his head down to produce a low header beyond the helpless Kano Pillars goalkeeper.

The Ghana Premier League giants took the lead through Godfred Asiamah who won a free kick after he was illegally halted in his run towards the penalty box and the winger elected himself for the resulting kick and hit it straight into the net with 67 minutes on the clock.

Pillars refused to fall and got the equalizer on the 70th minutes mark when through Victor Dennis making it 2-2.

Kotoko bowed to the Nigerians pressure and went behind in the game for the second time after Nyima Nekabari restored the hosts lead 6 minutes later ending the game 3-2 for the hosts.

The Porcupines will host the Nigerians later to seek for revenge and qualifications to the next round of the CAF Champions League.