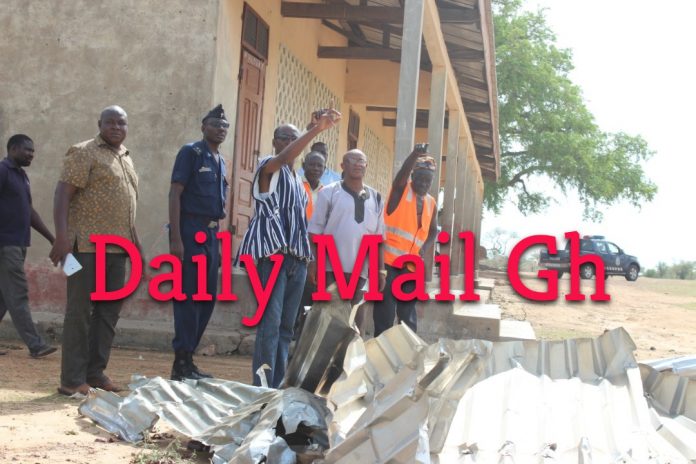 A man providing security for the Light House Christian Mission School at Basingo, a community in Sirigu in the Upper East Region died Tuesday after the school building he watched over collapsed on him.

The man identified as Kofi Aluwei had run into the school building to seek shelter during the stormy winds that swept through the area in the early hours of Tuesday night when a thick wall of concrete came down on him, killing him on the spot.

An eye witness who spoke to Dailymailgh.com’s Senyalah Castro said the torchlight of the security man which lay among the rubble after the storm subsided drew her attention.

According to her, she raised alarm after she discovered the security man lying in a pool of blood, but he died as community members tried to rescue him from under the concrete remains.

Several buildings, including schools and community health centres, in the area have either collapsed or have their roofs ripped off as a result of the rainstorm. Several trees and electric poles have also been pushed down by the storm.

Assemblyman for the area, Moses Akankeele also confirmed the death of a five-year-old girl.

Meanwhile, the District Chief Executive (DCE) for the area, Gerard Ataogye, has visited the affected communities to assess the extent of damage and commensurate with the bereaved families.

He presented some amount of monies to the families and assured that the assembly will work with the National Disaster Management Organization (NADMO) to provide those affected with some relief items.

He urged the people to desist from felling trees in the area which would serve as wind block when storms strike.

He also appealed to builders to conform to the modern ways of putting up structures that can withstand the stormy seasons, to minimize the loss of life and property.