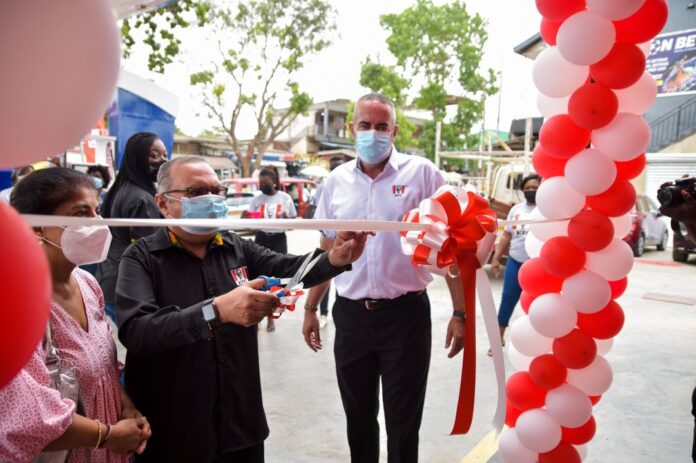 KFC Ghana has opened a new outlet at the Kwashieman Junction in Accra. The new restaurant, according to management, is expected to boost the fast food industry and to offer tasty products as well as exceptional customer service.

KFC, which is the world’s largest restaurant with over 38,000 branches spread in 110 countries, is expanding its presence across the world, particularly Ghana and Africa at large.

The food company, which was introduced onto the Ghanaian market by the Mohinani Group, formally known as Poly Group, held the brief but impressive event on Monday, 29th March, 2021, and was attended by a number of dignitaries.

The opening of this latest outlet brings the number of KFC restaurants in Ghana to twenty (20), almost meeting its target of opening twenty one ( 21) restaurants throughout Ghana.

Mr Ashok Mohinani, the Executive Director of Mohinani Group, the parent company of Masco Foods, noted that the growing middle-class and improved political stability, as well as the increasing economic growth in Ghana, has been identified as the main factors that continues to attract multinational companies such as KFC.

Delivering his keynote address, Mr Mohinani expressed his gratitude to the team from Masco Foods for the phenomenal work they put in to ensure the opening of the new outlet.

He said the new outlet, like the already existing ones, would provide quality service to its customers.

Mr Mohinani was optimistic that the public stands to benefit from a high standard in the fast food industry in terms of the quality of food.

Mr Mohinani also stated that the company intends to buy about 85 per cent of its vegetables and other ingredients from the local market to encourage local farmers to help boost the Ghanaian economy.

Also present at the opening ceremony was the General Manager of Masco Foods, Mr John Swanepoel, who intimated that 2021 was going to be an exciting year for Masco Foods because it marked the company’s 10th anniversary.

He said Masco Foods currently employs more than 700 Ghanaians, assuring Ghanaians that the number is expected to reach 1000 employees by the close of 2021, an indication of the expansion plans of the company.

The General Manager was quick to tout KFC’s reputation as an equal opportunity employer of Ghanaians with physical impairments.

The Mohinani Group is a third-generation business conglomerate of Indian origin.

Other brands within the Group are the Polytank Group of Business, Somotex and Electromart, as well as Somoco Ghana, distributors of the Bajaj brand of motorcycles.

Venture Capital Scandal: Duku, 2 others ordered to pay GH₵18.5m to...

Kasapreko donates 2,400 bottles of sanitizers to aid fight against Covid-19