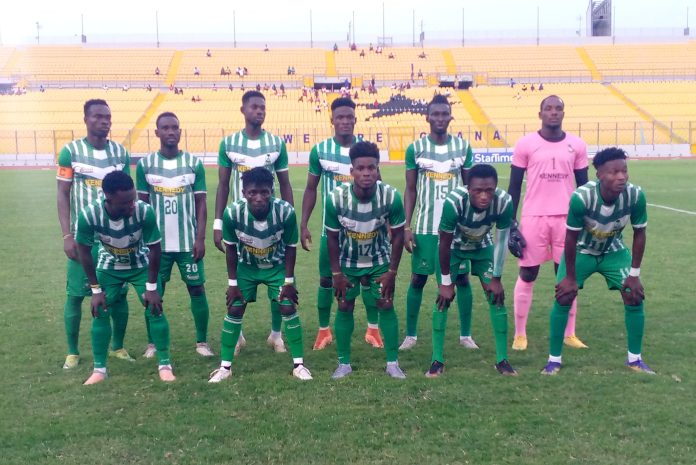 Ghana Premier League champions Accra Hearts of Oak SC suffered defeat on the road in their round 32 clash at the Baba Yara Sports Stadium in Kumasi against King Faisal FC.

Both sides created half chances but were unable to break the deadlock with the best goal scoring opportunities falling to the away team.

King Faisal came close and struck the wood work but the first half ended 0-0 with Hearts attackers failing to make their chances count.

After the break, the Phobians created a lot of decent chances but could not score and missed all their chances.

A corner kick awarded King Faisal in added time fell nicely to former Hearts of Oak defender Richard Akrofi who tapped it into the net to give King Faisal a precious win in their battle for survival.

The win means King Faisal move to 13th with 39 points and Hearts of Oak lie to 5th with 48 points.

King fFaisal will play Real Tamale United FC away and Legon Cities FC in their last match and will need three points out of the two matches to beat the drop zone.

Ghana has the largest medical drone in the world – Akufo-Addo

COVID-19: Ghana welcomes back 856 stranded citizens across the globe