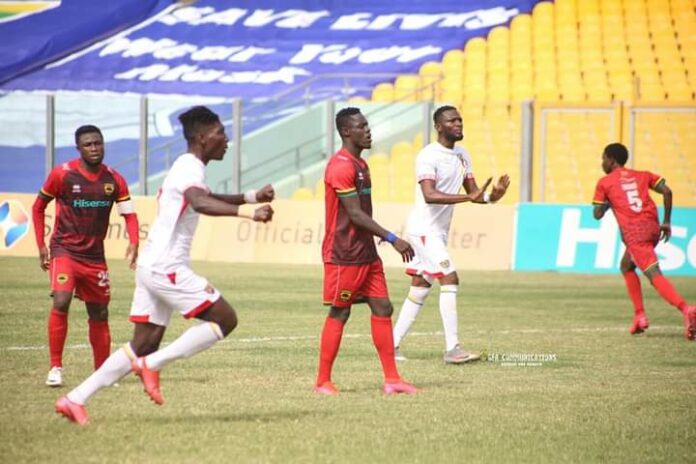 Asante Kotoko drew goalless with arch-rivals Hearts of Oak in Ghana’s super clash on Sunday at the Accra Sports Stadium.

Kotoko’s marksman Kwame Opoku and Isaac Mensah of Hearts both failed to score from 12 yards as the two biggest football clubs in the country played out a goalless stalemate.

Striker Kwame Poku missed a chance to take his tally to seven this season after missing from the spot in the 70-minute.

After Richard Atta saved the 1st minute spot kick, Hearts of Oak controlled the game and dominated the game in terms of ball possession as they forced their opponents to sit deep in their own half. Patrick Razak hit the post in the 6th minute but he was eventually flagged offside and Obeng Kojo should have done better with his 9th minute opportunity.

The next big chance for Kotoko who played as the home side – came in the 32nd minute when Naby Keita shot over the bar after Latif Anabila squared a good ball for him in the area.

The second half began with both sides firing at each other. First, Razak fired a shot off target in the 49th minute before Kotoko’s Keita forced a save from goalkeeper Attah in the 50th. Porcupine Warriors captain Emmanuel Gyamfi’s also saw his effort in the 64th minute and was once again stopped by the influential Attah.

Hearts of Oak caretaker coach Nii Noi brought on striker Isaac Mensah for Obeng Kojo at the hour mark before Michelle Sarpong replaced Victor Aidoo in the 69th minute. Mensah went on to earn his team a 70th minute penalty as he was brought down by the Kotoko keeper Razak Abalora. The former Nkoranza Warriors striker came forward to take the kick but his poor effort was parried away by Abalora to keep the game at 0-0.

On the other hand, Johnson Smith brought on midfielder Adom Frimpong for Emmanuel Sarkodie in the 57th minute before Mudasiru Salifu replaced striker Keita in the 62nd.

With six minutes from time Kwame Poku drifted away from center back Mohammed Alhassan to unleash a powerful strike that kissed the joint of the crossbar and right goal post of Richard Attah as the mammoth encounter failed to produce a winner.

Ejura killing: Give us justice – Fighters, #FixTheCountry campaigners to meet...

Boadu scores for Alkmaar to kick Hacken out of Europa League