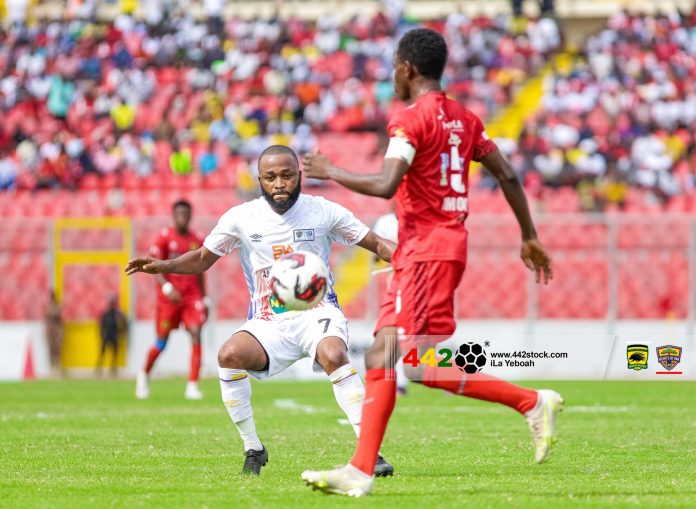 The goal was Mbella’s 16 of the campaign, with 14 scored at the Baba Yara Sports and the remaining two on away soil.

The home team looked more organised and compared in the early minutes.

Mudasiru sent a lopped pass for Boateng, he controls with his head, but Hearts Mohammed Alhassan is on hand to clear it out of danger.

Kotoko came close in the 3rd minute, Imoro pounced on a loose ball, he dribbled his way through and strike a tame shot which hits the frame of the post.

Goalkeeper Danlad Ibrahim was called to duty as he  parried away Awako in-swinging cross away to safety after the 6th minute.

Two minute on, Kotoko’s Nettey surged forward and fed the feet of Mfegue who tried to set up Mbella, but his first-time effort couldn’t reach his target.

Brazilian import Fabio Gama turned and lobbied the ball through for Mbella, but goalkeeper Ayi was quick to tip it out for a corner kick which was cleared.

After 15 minutes of action, referee Kennedy Pady  awarded a controversial penalty to Kotoko when Hearts midfielder Nurudeen Abdul Aziz brought Gama down in the box.

Cameroonian forward Franck Etouga Mbella sent goalie Ayi the wrong way to give Kotoko the lead in the 17th minut from the spot kick.

Despite the series of chances created by both sides, Mbella’s penalty was enough for the Porcupine Warriors going into the break.

Minutes after recess, Gama received a return pass from Mfegue but he skies his effort .

In the 68th minute, Gama nearly doubled the advantage with a golden opportunity but he side netted it.

With 20 minutes left to play, Kotoko’s Georges Mfegue dummied Salim Adams and sent in a teasing cross which nearly beat Ayi, but he managed to tip it over for a corner.
Kotoko brought on Salifu Mudasiru and Emmanuel Keyekeh for Maxwell Agyemang and Fabio Gama as Hearts also introduced Patrick Razak, Samuel Inkoom, Agyenim Boateng and Kofi Kordzi for Salim Adams, Gladson Awako, Isaac Mensah and Fatawu Mohammed respectively.

Notwithstanding, Kotoko held on to their goal to keep their title hopes in good shape.

The win sends the league leaders to 52 points with Hearts on 6th place with 36 points.