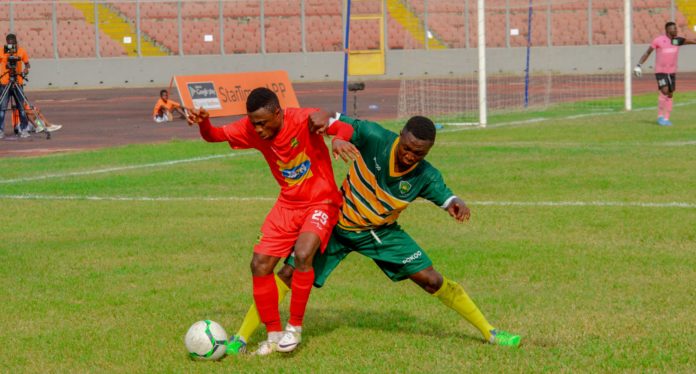 The Porcupine Warriors won their third match of the season after suffering a back-to-back defeat to Berekum Chelsea at home and Medeama SC away in Tarkwa last Wednesday.

Kotoko were awarded a penalty in the first half when defender Emmanuel Nettey was brought down at the edge of the 18-yard-box.

Burkinabe import, Sogne Yacouba, could not convert the resulting penalty as his effort was saved by goalkeeper Issah Razak.

After the recess, coach Maxwell Konadu of Asante Kotoko made a change by bringing on Richard Arthur to replace captain Emmanuel Gyamfi.

Dwarfs had numerous chances in the second half but failed to make amends or utilize the opportunities that came their way.

Substitute Matthew Cudjoe was first to react to midfielder Justice Blay’s cushioned header to put the Porcupines 1-0 in the 83rd minutes.

It was a day for the substitutes as Richard Arthur pounced on a loose ball inside the six-yard box to make it 2-0 to the host.

Konadu and his charges travel to Accra next Sunday for an epic encounter against resurgent Hearts of Oak.