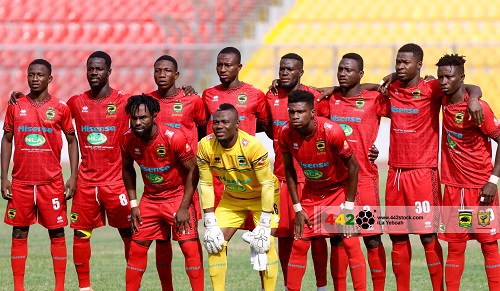 Kumasi Asante Kotoko SC head coach Prosper Narteh Ogum has made wholesale changes to his starting line up for the away clash with Medeama SC this afternoon.

Kotoko have not been consistent in their last five matches in the ongoing 2021-22 season in Ghana’s top-flight allowing their today’s opponent to catch up with them.

The Porcupine Warriors have loss three out of their last five games with just a single win and one draw in those five matches in the Ghana Premier League.

The Reds are hoping to return to winning ways as they face second placed team Medeama SC in the match-day 31 of the 2021/22 Ghana Premier League season today.

Prosper Narteh has decided to go for Evans Adomako, Maxwell Agyemang and Samuel Boateng in his starting lineup for the game despite these players playing few mintues in the league.

Top performers like Fabio Gama, Abdul Ganiyu Ismail and Yussif Mubarik have all been excluded from the Asante Kotoko’s starting line up for Medeama SC game.

Cameroonian import Georges Rodríguez Mfegue has also been left out of the Kotoko lineup.

Below is Asante Kotoko line up to face Medeama SC