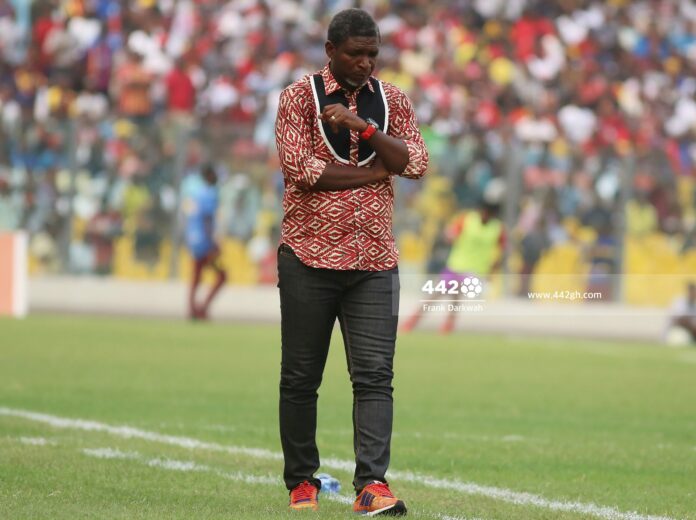 Asante Kotoko’s 2020/21 Ghana Premier League opener over the weekend was highly anticipated, considering all the strides that had been made by the club off the pitch in the months leading up to the season.

Every other week, it seems, Kotoko has a new sponsor/partner coming on board, while some quality signings have been made to reinforce the squad, following the ultimately short-lived transfer ban imposed on the club by its Life Patron, the Asantehene. Kotoko even got themselves a Brazilian — not that I was impressed, anyway — to add some samba flavour to the mix.

All that work was supposed to culminate in a successful season — majority of those on the Joy Sports crew have picked the Porcupine Warriors to win the league, for instance – and, on Sunday, when Kotoko hosted the Techiman Eleven Wonders at the Accra Sports Stadium, the campaign was supposed to get off to a blistering start.

Looking fly in their new Errea gear, Kotoko seemed ready for a grand launch. Head coach Maxwell Konadu made headlines, even before a ball was kicked, by handing goalkeeper and captain Felix Annan a first league start in 11 games, with Kwame Baah — who stepped up for the starting berth and made it his own when, at the beginning of the year, Annan took time off to get married — back to the bench.

The permanence – or otherwise — of that switch would be seen as the season goes along, but Konadu’s choice wouldn’t be made any easier by Annan’s performance on the night: brilliant, as always. Kotoko’s collective display, though, wasn’t, and Wonders would have felt hard done by had they not scored that late leveler to Kwame Poku’s 55th-minute opener. But they did, and Kotoko suffered an early setback.

“This is the first league match. Yes, we wanted to secure the three points but, unfortunately, it couldn’t happen,” Konadu told the media post-match.

“But we’ll still work hard. It’s just the first match. The team is still gelling together and I believe that as time goes on, the team will become better than we did today.”

This cup, though, isn’t Amponsah’s. Kotoko, the club, isn’t in a fix; Kotoko, the team, is. Much of Kotoko’s struggles over the years have been due to, I think, an inability to draw the line between the fortunes of club and team, even if the two aren’t mutually exclusive. It’s why some of Amponsah’s predecessors have been sacrificed over poor team performances, but that shouldn’t be the young administrator’s lot.

Amponsah’s task of fully ushering Kotoko into the professional era they have been on the brink of for years is hard enough, yet he is excelling at it. The other bit — playing well and getting results — should be Konadu’s to sort out… and fast.