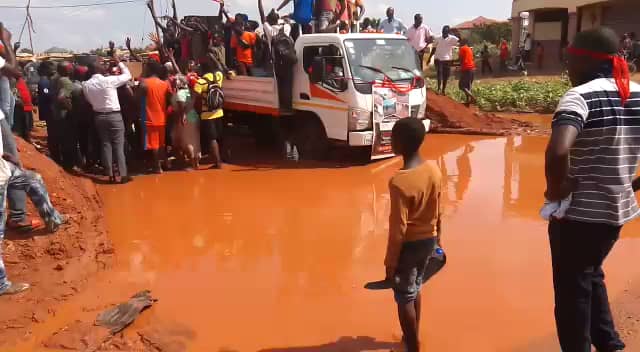 Clad in red attires residents of Atadeka, Washington and New York on Monday thronged the streets to protest the bad nature of their roads.

The three communities are latest to mount pressure on government to get their roads fixed despite assurances by city authorities.

Women from these communities who joined the protest are not only chanting, they are also talking.

“This road has been in this poor state for many years. Last month a pregnant woman delivered in a vehicle because of the poor nature of this road. Because of the bumpy nature drivers have to slow down in order not to lose lives. It appears we are not part of Ghana. We have lamented severally to our MCE but he is not working to get this road fixed”, one of the protesters, Agartha Ayisi told our correspondent.

“We have heard several assurances from government. Many high profile appointees in this government use this road. Until one of them is crashed authorities will not see the need to fix this road”, another woman protester said.

The deplorable states of the road in parts of the country have become a challenge to many in Ghana. Manhean residents in the Ga West district of the Greater Accra region over the weekend also embarked on a demonstration over the poor state of their roads and threatened a “no road, no vote” campaign ahead of election 2020.

In Abuakwa in the Ashanti Region, residents staged a similar protest to demand their roads fixed.

Attempts to get authorities to receive their petition at that time, yielded no results.

In many of these areas, protesting residents have burned tyres and wielded placards with varied inscriptions to have their roads which they say are full of potholes and bumps fixed.

Government in its quest to address the poor road networks in major parts of the country has declared 2020, as the “year of roads”.

Delivering the 2020 Budget in Parliament on Wednesday, the Finance Minister Ken Ofori Atta said the government will largely focus and prioritize road projects to improve infrastructure in that sector and bring an end to the cries of Ghanaians for better roads.

Ridiculing the opposition National Democratic Congress’ (NDC) claims of massive road infrastructure in its Green Book, Ofori-Atta indicated that the governing party will revamp the road sector and pay contractors what is owed them.

#FixTheCountry: Hundreds to protest in Ghana over hardship