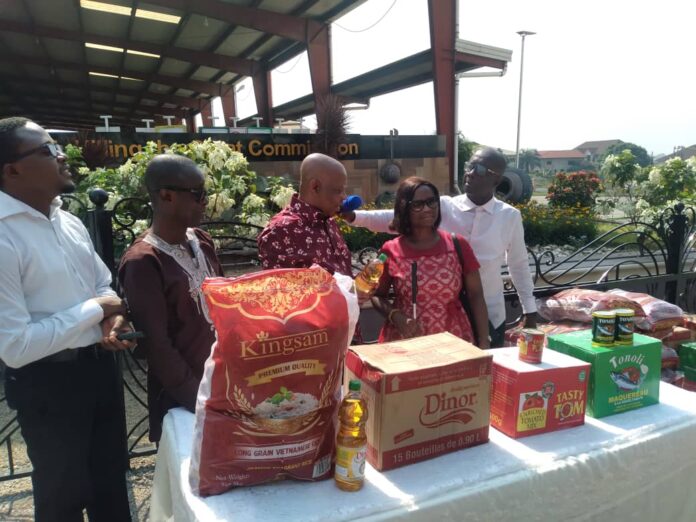 The Calvary Charismatic Center (CCC), a Kumasi-based charismatic church on Wednesday presented some food items such as bags of rice, cooking oil, canned tomatoes and canned sardines to members of the Ghana Blind Union (GBU) ahead of the upcoming yuletide.

The gesture, according to the General Overseer, Reverend Ransford Obeng (CCC) was to show the GBU members and other visually-impaired persons that they are in their thoughts.

Reverend Obeng said, ‘it is the collective responsibility of those of us who are privileged to be seeing and in the position to give to support others as Christmas draws near’.

The CCC overseer promised the union of continued support from the church so that they can supply their members across the Ashanti Region with white canes to aid their mobility.

Receiving the items, George Kyeremanteng, Chairman of the Ghana Blind Union-Ashanti thanked the General Overseer and the church for the gesture.

He noted that CCC and Rev Obeng had taken upon themselves the challenges of the GBU as their own and had unceasingly and without restraint donated to support them every year for almost 4 years now.

The Chairman said their membership in Ashanti was about 6, 000, adding that so far CCC had given them over 100 white canes.

‘’CCC embodies true Christianity and evangelism and as they donate to us we also reach out to our needy members with the same, together we bring happiness to the society’’, the Chairman noted.

In a related development, Reverend Ransford Obeng has commended Ghanaians for the manner they have comported themselves in the face of the recent economic hardships and wished them a merry Christmas.

He noted that many countries had suffered the same but they rather became agitated with some resulting in violence.

Ghana, he noted, was a blessed country where the inhabitants, no matter the prevailing economic conditions, choose to work and allow God to turn their fortunes around.

‘’I must commend the people of Ghana for conducting themselves in peaceful manners despite the recent economic crisis and I know with peace prevailing we would be able to enjoy the little we may have and share with others who may not have anything during this Christmas’’, Rev Obeng stated