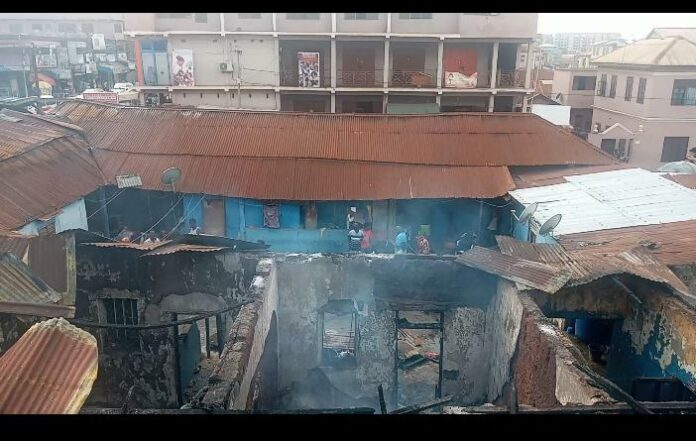 A Tuesday morning fire swept through three shops, razing down five rooms in a house close to the popular Bantama market in Kumasi.

Firefighters who were deployed to the scene at about 6:17 am local time met items including musical instruments badly damaged by the inferno.

Affected shops were closed at the time the incident occured as firefighters had a tough time breaking into them to put off the fire.

“One of my granddaughters drew my attention of the inferno in one of my son’s room and so we had to flee for safety. All our belongings have burnt. We are so sad”, said Ama Pomaah, one of the affected victims as she salvaged her room.

“I had a call from one of my colleagues of the incident and so I had to rush here. I found my shop razed down and all my wares have been destroyed”, another victim deals with electrical appliances said.

Although there was no casualty recorded in the incident, the Ghana National Fire and Rescue Service say investigations have started.

He said: “As we speak the fire is finally extinguished. Salvaging is ongoing and fortunately we have recorded no casualty”.

“In all we had three pumps at the scene. While one was fighting the fire from behind and the other from the frontage. We have been able to control the fire and we made sure there was no casualties”, the fire officer said.