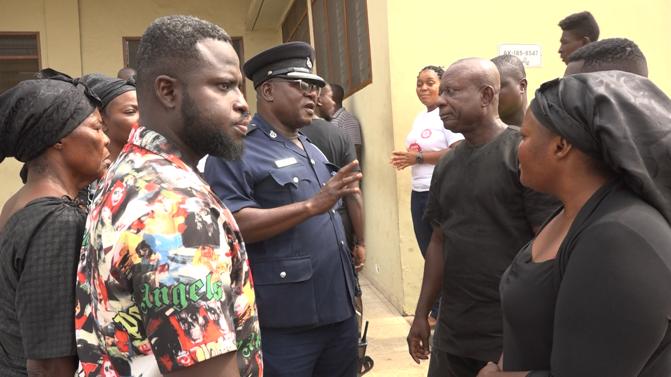 Belinda Awuku, wife of the Bank of Ghana driver standing trial over the murder of a restaurant operator in Kumasi, was on Friday remanded into prison custody by the Asokwa District Court

This was after the court turned down a bail application by Counsel for the couple.

Belinda Awuku, who is the second accused, made her first appearance in court on Friday — following her arrest on a warrant, after failing to appear in court on January 10, 2020.

She has been proffered with a provisional charge of abetment of crime.

Counsel for the couple, Benjamin Darlington Tandoh, prayed the court to grant her bail because she has been cooperating with police investigators.

Mr Andoh was quick to indicate that he was not in a haste to plead same for her husband, Edwin Awuku, since the life of a woman had been lost.

He also argued that Belinda’s bail application was premised on evidence gathered by police suggesting she became a person of interest after the incident had already happened.

He said that the accused person will not interfere in the case, but that was turned down by the court.

“My humble prayer to the Honourable Court is to consider A2 (Belinda Awuku) to bail”, he prayed.

But that was vehemently objected by Prosecution which prayed the court not to grant bail because the accused cannot be trusted.

The prosecutor argued the accused person who once feigned to be bleeding but failed to seek medical attention, attempted to escape to Accra, hence, the issuance of a bench warrant for her arrest.

The court presided over by Rosemarie Afua Asante Esq, turned down the bail application and, subsequently, remanded the two into prison custody, to re-appear on February 7, 2020.

The couple is standing trial over the death of Comfort Owusu Afriyie, 47, who was shot at the Cedar Crescent Hotel, at Danyame in the Ashanti Region.

Police had to whisk away the two suspects from the tensed court premises as relatives of the deceased launched an attack on the two.

It is gathered that the deceased will be buried on Wednesday, February 22, 2020.

Ghana to be compensated for any harmful side effects of COVAX...

Construction of 100-Km of Kumasi roads to start in December –...