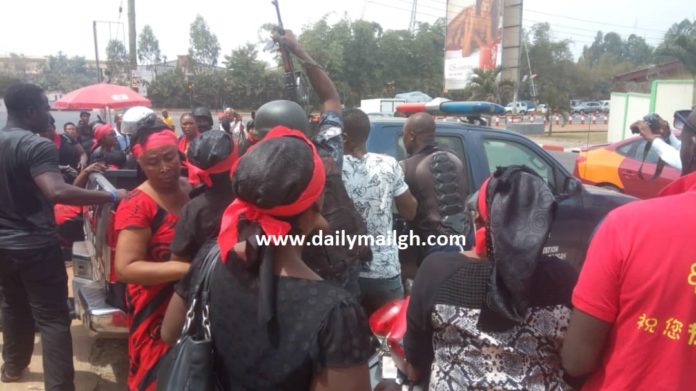 There was a wild scene outside the Asokwa Circuit Court on Friday after the couple standing trial in the hotel room shooting incident in Kumasi, was attacked by family of the deceased.

The accused persons, Edwin Awuku and his wife Belinda Awuku, are facing the court over the death of 46-year-old, Comfort Owusu Afriyie in an incident which occurred at the Cedar Crescent Hotel in Kumasi.

At a third sitting today however, prosecution and the defence lawyer were for the second time absent in court.

The court presided over by Her Worship Rosemarie Afua Asante consequently adjourned the case to March 5, 2020.

But the family of the deceased who became infuriated by the development attempted to physically assault the suspects.

“You put your hands in my family, wicked people”, an unidentified family member of Afriyie yelled as the accused persons were been whisked away by police officers.

Other police officers were spotted calming nerves as some of the red-and-black claded family members were also seen wailing uncontrollably at the charged court premises.

“So far we are unhappy with how things are unfolding. Both the prosecution and the defense lawyers were not in court and this is frustrating”, family spokesperson, Godfred Owusu Afriyie told Dailymailgh.com adding that, “until justice is served, we will not relent”.

Afriyie was last seen on New Year’s Eve but was confirmed dead the following morning at the Cedar Crescent Hotel in Kumasi, the Ashanti Regional capital.

She was lodging in one of the hotel rooms with her boyfriend, Awuku, 42, on January 2, 2020 when the incident occurred at about 1am local time.

An earlier police report sighted by Dailymailgh.com suggested that the suspect and the deceased were both attacked in an armed robbery case while in their hotel room on that fateful day.

Preliminary investigations have, however, revealed that the deceased was shot and killed by her boyfriend, police in the Ashanti Region said in a statement on Tuesday, January 7.

Police have, however, denied an incident of armed robbery attack in the hotel as widely reported.