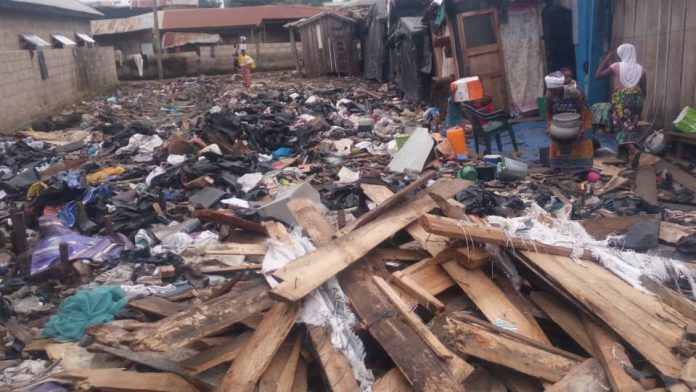 A heavily armed police and military contingent has been deployed to Dagomba-Line, a slum located at Asokore-Mampong in the Ashanti region of Ghana.

It follows a violent clash between two factions in the community over a parcel of land Tuesday morning.

The attack was triggered by an attempt by the landowner to pull down structures on the land following a court order. But that was fiercely resisted by settlers who engaged in what could be described as a free-for-all fight with the landowner and his team.

At least seven persons have been severely injured as the angry youth set some houses alight.

Dailymailgh.com gathered that the injured are receiving treatment at separate hospitals in the Asokore-Mampong Municipality.

One of the settlers, Bawa Seidu, who narrated the incident to Dailymailgh.com says the inhabitants were not given any prior notice before embarking on the exercise.

“We woke up this morning and we heard some individuals asking us to pack out and that they were going to demolish the structures. When we inquire we were told that the landowner wants to develop the land. They forcefully ejected us from our rooms and burned our properties as well. The police also fired gunshots and some of our colleagues are receiving treatment at the hospital. Now we have nowhere to go,” narrated Bawa.

“This development is unfortunate. We are all Ghanaians and for him(the landowner) to be treating us like this is unfortunate”, a head potter, who gave her name as Zenabu said.

When contacted, the landowner, Imam Samba justified his actions. He told Dailymailgh.com that he will use all legal means to claim his land.

“…so I went to court after eight months of notice which they refused. So today when I came with the police to evict them they started pelting us with stones and decided to set some of the structures ablaze. Everything has been scattered and many of our children have been injured”, he said.

Coronavirus: how big, how bad, and what to look out for