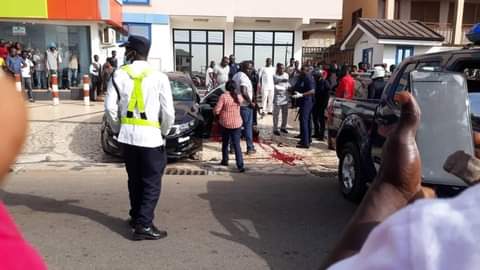 A road rage turned bloody after a 31-year-old man shot another man on the Ayeduase-KNUST road in Kumasi Tuesday morning.

Police in the Ashanti Region have confirmed the incident adding that the two are in critical condition and are receiving treatment at the Komfo Anokye Teaching Hospital (KATH).

Samson Zabanga who was driving a KIA Altima saloon vehicle had accused Kwame Amoah, 52, of reckless driving, sparking a heated argument between the two.

He suddenly pulled a gun and shot the victim three times in the abdomen during the ensuing melee.

This prompted an angry mob who attempted to attack the gun-wielding man as they pelted stones at him destroying his vehicle in the process.

Sensing danger, he shot himself after he was surrounded by the police who had rushed to the scene to prevent any further chaos.

Both men were rushed to the Komfo Anokye Teaching Hospital for treatment as police say their condition is “critical”.

“At the moment we have our men at the hospital and when they recover we will continue with investigations. But for now, they are under police guard at the hospital”, Spokesperson for the Ashanti Regional Police Command, ASP Godwin Ahianyo said.

The incident caused heavy gridlock on that stretch as officers towed the vehicle to the KNUST police station.