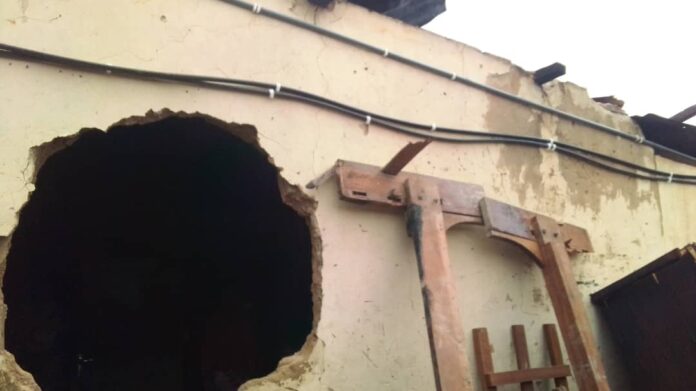 Two minors have died after a fire in a block of a compound house at Moshie Zongo in the Manhyia North Constituency of the Ashanti Region.

The victims, a girl and a boy were sleeping in their chamber and hall apartment when the fire broke out at about 8 a.m. Tuesday, while their mother was preparing their other siblings for school, dailymailgh.com had learnt.

It is gathered that residents had to retreat as thick smoke billowing from the building impeded rescue efforts. Properties including TV sets, clothes and other domestic wares were destroyed in the blaze.

“We called the fire service but they told us there was no water in their pumps and that there was also heavy traffic on the road, a witness told dailymailgh.com.

“So we had to take matters into our own hands; by the time we rushed to the scene the fire had consumed the children”, the witness said.

The cause of the fire is yet to be established as residents reportedly turned their anger on firefighters who were deployed to the scene for arriving late, according to Spokesperson for the Ghana National Fire Service in the Ashanti Region, DO III Desmond Ackah.

The two siblings belonged to a family of eight. Their charred bodies had been conveyed to the morgue by police officers at the time dailymailgh.com visited the scene.

Friends, sympathizers and other family members had gone to console the family. Distraught father, Ahadaar Hafiz, a local security man in the Central Business District tells dailymailgh.com he is saddened by the tragic incident.

“My efforts to rescue my children yielded no results. Both have perished. I was even preparing to vacate this house until this tragic incident has happened. All that I will say is to give thanks to God and console my wife”, the visibly saddened man told reporters.

Speaker directs probe into death of minor during blood donation