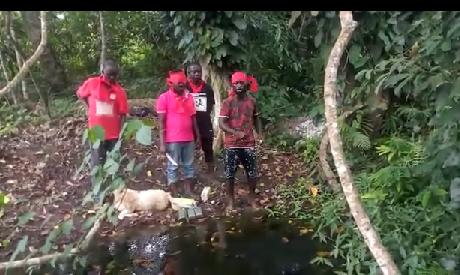 Some youth in Sekyere Kumawu in the Ashanti Region have invoked curses on some individuals within the governing New Patriotic Party (NPP) after the renomination of Samuel Addai Agyekum sparked widespread anger in the area.

In a nearly 5 minute video footage, the group numbering about four were seen slaughtering a sheep and cracking eggs as they called out the Ashanti Regional Minister, a Council of State Member, NPP Regional Chairman Bernard Antwi Boasiako, among others.

They want the gods to deal with these individuals as they accuse them of attempt to impose the President’s nominee on the community.

Samuel Addai Agyekum has on two occasions failed to secure a two-thirds majority of votes to be confirmed as DCE for the area in an election supervised by the Electoral Commission.

The four men accused the nominee of stifling development in the area while in office and also schemed to reduce the votes of the NPP prior to the 2020 polls by supporting an independent candidate with his resources.

About a week ago, a pro-NPP group calling itself the Concerned Youth of Sekyere Kumawu shared similar concerns.

“The DCE sought to use his office to create divisions within the grassroots in the Constituency…During his term as DCE, development came to a standstill and this will affect the party in its quest to ‘break the eight’ going forward”, the convener of the group said.

Meanwhile the confirmation of Samuel Addai Agyekum will come off today amid heavy security.