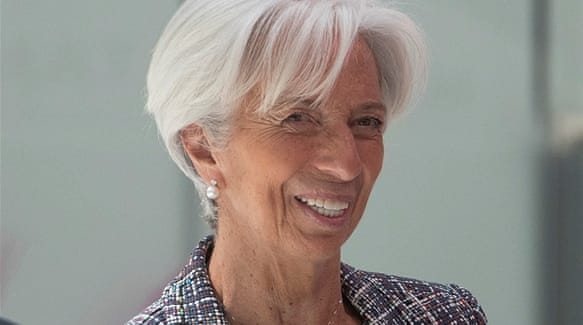 Christine Lagarde resigned from her role as managing editor of the International Monetary Fund as she prepared on Tuesday afternoon to be confirmed as the new president of the European Central Bank.

Lagarde was France’s finance minister, though not an experienced economist, ahead of her appointment to the IMF in 2011. She is set to take the reins of European monetary policy at the ECB.

Lawmakers in the European Parliament are set to confirm her nomination along with those of Ursula von der Leyen as European Commission president, Charles Michel as European Council president and Josep Borrell as European Union foreign policy chief.

In what was expected to be a close confirmation vote, Liberal bloc politicians swung behind the nominations on Tuesday afternoon, moving the four closer to securing the needed majority.

“My group will support Ms von der Leyen today,” said Dacian Ciolos, head of Renew Europe. “We are looking forward to work[ing] intensively with her to move Europe forward. There is a lot of work ahead of us. Let’s renew Europe together.”

A Lagarde policy of “more of the same” is considered likely given that, despite leading the IMF for the past eight years, she is a relative newcomer to the intricacies of central banking and will likely take her time before seeking to stamp her own mark on the role.

“There are concerns about her not being an economist, not having monetary policy experience,” Professor Michele Chang, of the College of Europe’s European Political and Governance Studies department, told Al Jazeera in a recent interview.

“We have heard these types of concerns before, when she was appointed to lead the IMF, but she has proven herself an effective manager.

“The problem with the ECB is the high turnover in the Executive Board coincides with the selection of the new ECB president. Markets are looking to see if the ECB will continue its unconventional monetary policy, and if she has the capacity to lead the ECB in new monetary policy innovations if needed, like Draghi did.

“People are going to be looking for her to have her own perspective on that and not only relying on the monetary policy experts around her, like Philip Lane (the Irish chief economist of the ECB). Jobs like the ECB presidency will need more technical capacity than that of the IMF job, but she has shown herself to be an excellent leader of a multinational economic organisation.”

The race is now on to replace Lagarde at the IMF. Leading candidates include the Bank of England Governor Mark Carney and Jens Weidmann, the head of Germany’s Bundesbank – though Weidmann has reportedly ruled himself out, saying he was “very happy” in his current job.

Covid-19 has delayed but not derailed our progress as a nation...