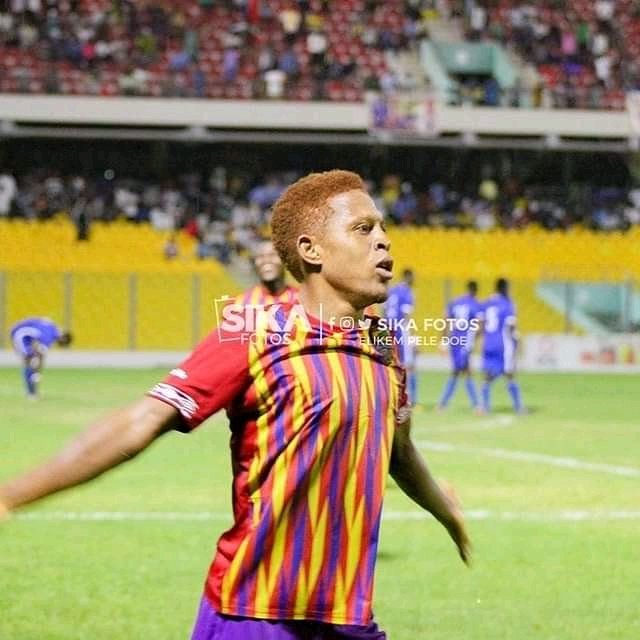 ‘The Forgotton but Dedicated Hearts of Oak player who deserves a second chance to prove his mettle for the club this season and next is no other than defender Larry Sumaila Ibrahim.

With his professionalism and humility coupled with great performances any time given the opportunity to play, the 25-year-old right-back deserves a second look by the head coach of the club, Samuel Boadu as time goes by in both the Ghana Premier League and MTN FA CUP Competition.

He has been out of favour at the Rainbow club this season and has barely kicked a ball for his team in the ongoing 2021-22 season in Ghana.

The defender has been unused throughout this season by head coach of the club Samuel Boadu in a season the Phobians are struggling for consistency.

The right-back got his chance to play for Ghana Premier League and MTN FA CUP holders on Wednesday afternoon against newly promoted team Bibiani Gold Stars FC at the Accra Sports Stadium.

This was due to the outbreak of an unknown disease at the camp of the champions which left them with no other choice than to fall on the rejected player for the first time in the league this season.

Unsurprisingly, the right-back produced a wonderful performance in the colours of the Phobians again with extremely good display on the day for the depleted Hearts of Oak SC team

He produced a man of the match performance with a commanding display and gave coach coach Samuel Boadu reasons to play him more often than he’s been limited to at the club this season.

He was very solid against Gold Stars and deserved to have been given the Man of the Match award which was won by center-back and captain on the day Mohammed Alhassan.

Larry Sumaila’s performance against the Green and Yellows Miners shows he has more to offer and must be considered going forward after his show in the week 29 clash against Gold Stars at home.

He didn’t show anything like rustiness despite spending his entire time playing on the bench with virtually no minutes in his locker.

He was part of the Hearts of Oak SC team that won the 2020-21 Ghana Premier League and MTN FA CUP and played more often than this season.

Larry Sumaila could be very important in the Hearts setup if given more opportunities in the future for the club.

WWLTW 12: Faisal Burning All Over, WAFA Revisit ‘Notorious’ Past