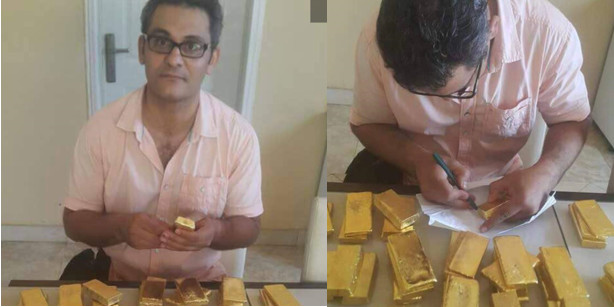 A Lebanese, Naji Khalil, is likely to face jail in Ghana over an alleged gold fraud case as he stands trial at a Circuit Court in Accra.

Naji Khalil, who has been banished from Lebanon, is currently in court for alleegedly defrauding Businesswoman Kadija Khatir, an Algerian Citizen resident in France to the tune of $140,000.

Business partners of the victim in Ghana took the matter up to make sure that Naji Khalil is penalised. The Economic and Organised Crime Office (EOCO) in Ghana was petitioned to investigate the case.

It was upon the investigations that Mr. Naji admitted receiving the money but claimed they later gave the money to ABRAHAM MOH’D MAZEN FAOURI their accomplice. He has been involved in a lot of gold scams, one of which was reported by in the news last year.

Naji Khalil is a Labanaese National who has been residing in Ghana under the guise of doing business with the modus operandi to defraud foreign investors of their hard-earned money.

According to the facts of the case, in the year 2018, Naji Khalil masterminded many scams and organized criminal activities in Ghana. He assembled a team of fraudsters by names NABIL ZAYANI a Lebanese, and ABRAHAM MOH’D MAZEN FAOURI a Jordanian resident in Egypt.

One of them was this case where they presented a business proposal to their victim, the businesswoman Kadija Khatir. These three criminals proposed to Madam Kadija that they have in Ghana rough Gold crystals worth $4 billion in Ghana and that they are searching for an investor who will pay the shipment cost of airlifting the said Crystals to Europe for an agreed percentage of the said Crystals. Madam Kadija was then shown samples of the Crystals in the office of Diplomatic Freight Forwarding, a company Naji Khalil was the CEO.

Madam Kadija then went back to Europe where she decided to make the payment by swift. All attempts to pay through swift was unsuccessful as the account kept bouncing the transaction.

It is based on this that Mr. Naji Khalil suggested to Madam Kadija to hand over cash to his business partner in London since the transfer isn’t going through. It also turned out that the fake account was given intentionally so as to erase any traces of the transaction.

Upon receiving the said amount Mr. Naji issued a receipt to Madam Kadija to acknowledge the receipt of the 138,000 USD. All the three suspects decided to ignore the calls of Madam Kadija (Victim). They also went further to issue a threat that if she ever set her foot in Ghana they will hire a Nima boy for $100 to kill her.