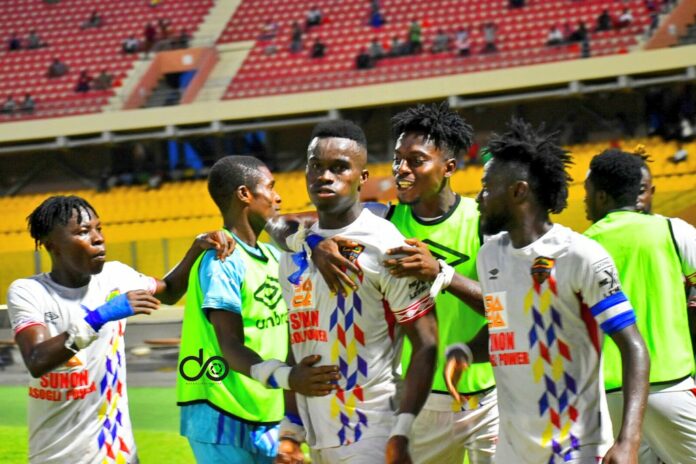 Hearts of Oak with their first attempt of the game after left back Raddy Ovouka made a good serging run from the flanks and launched a belta but went wide off the goalpost resulting in a restart.

Legon Cities goalkeeper Sylvester Sackey came up with a brilliant save to deny Hearts from taking the lead in the opening minute of the game.

Ghana U20 captain, Daniel Afriyie Barnieh dribbled brilliantly inside the box to set up striker Kojo Obeng Jnr to break the dead with a close range finish.

Midfielder, Frederick Ansah Botchway made it 2-0 to the Rainbow Boys few minutes later with a pile driver from outside the box into the bottom right corner to grab his second goal of the season for Hearts.

Nigerien import, Victorien Adebayor scored from a free-kick to reduce the deficit to one goal for the home team before the break.

Coach Samuel Boadu applied a pragmatic approach in the second half as his team defended with all their might to keep the Royals at bay.

Legon Cities were the better side in the second half but Hearts of Oak’s defense stood strong and resolute to prevent an equalizer and got a reward for their compactness at the back to secure a hard earned narrow win.

Hearts return to the summit of the table ahead of Sunday’s epic clash against Asante Kotoko SC at the Accra Sports Stadium.

Enoch Adeboye sexism row: Why the Nigerian pastor is so popular