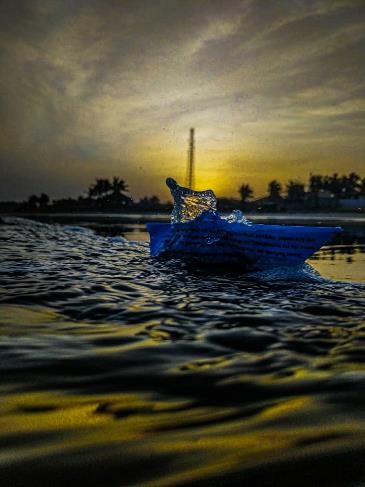 “You must not lose faith in humanity. Humanity is like an ocean; if a few drops of the ocean are dirty, the ocean does not become dirty.” – Mahatma Gandhi, Indian lawyer and nationalist

Reflecting a blazing sun, the Atlantic Ocean stretches out from Ghana’s shores. At some far-off point, it converges with four other oceans — the Pacific, Arctic, Indian, and Southern — and fills the gaps between the world’s seven continents.

The world, when you think of it in this way, is little more than a collection of islands, glued together by water. For many who live near enough to it, however, the sea means much more. Along Ghana’s 350-mile-long coastline, livelihoods are earned in a buzzing fishing industry. Here, too, lives are enlivened and extended, through recreation and exercise, for which there is space aplenty.

Still, on any day at the beach, humans are outnumbered — by the sand, of course, but also by something less pleasant: refuse. Carried along by the wind that blows so generously, the garbage inevitably finds its way into the sea, where it does more than merely mar the striking beauty of the waters.

To aquatic life, such waste poses a real threat, the subject of Ye Wo Adze Oye, a song by M.anifest and A.B Crentsil — two Ghanaian artistes from different genres and generations, sharing the same concerns on the Jayso-produced track.

“More filth than fish,” the younger man raps, in describing the current state of Ghana’s waters.

That was in 2014, and — as captured by photographer Boakye Buckman — little has changed some six years later. Looking through the lenses of Benjamin Appiagyei, however, it is apparent just how much better the ocean — and life itself — could be for the enjoyment and benefit of all, if we could save every drop that makes it so mighty.

Gandhi was a wise man, and remains one of history’s most quoted and most revered figures even decades after his death. Still, his words at the outset of this article — the latter half, anyway — may not resound with everyone.

Not with M.anifest. Or Crentsil. Or me. Or anyone who cares as much as they should.