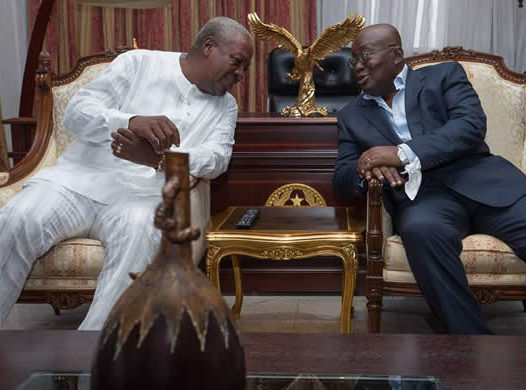 Former Ghanaian leader John Mahama at this year’s anniversary of the December 31 Revolution took on his successor, Nana Akufo-Addo, saying the latter has failed to manage the country’s economy effectively.

Mr. Mahama accused Akufo-Addo of always shifting the blame when things go wrong in his government even though he has been in office for five years.

According to him, that is not a mark of a good leader.

“Leadership is about responsibility. It is only a poor leader who shirks responsibilities and shifts blame,” Mahama said at the event held in Accra on Friday.

He added: “We had a power crisis – dumsor – in this country because of a lack of investment in generation for many years, and so we were consuming more power than we generated.

“That was the situation I met, and yet I did not say it is not my fault. I went to Parliament, took responsibility for it and promised to fix it, which we did.

“Today somebody [Akufo-Addo] claims he inherited a weak economy, which he hasn’t been able to be responsible for, five years on. It’s always about Mahama and NDC.

“If he [Nana Akufo-Addo] cannot do the job, he should give way for the NDC to do it for you,” the former president said.

Mr. Akufo-Addo while addressing delegates at the New Patriotic Party Conference in Kumasi on December 18 admitted Ghana was in hard times but cannot be blamed because of a COVID-hit economy.