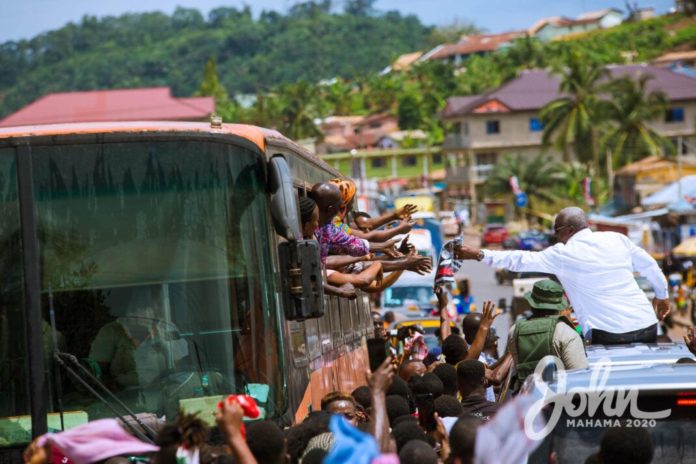 The fear of the unknown portends bad omen as one is not sure what to expect and how to prepare to deal with it or defend oneself against it. It is like prowling in an ancestral evil forest in the dead of the night without moonlight. This is the predicament of Akufo-Addo and the New Patriotic Party (NPP) regarding the looming victory of John Dramani Mahama in the upcoming general elections.

Ever since the former President overwhelmingly won the bid to bear the flag for the largest opposition National Democratic Congress (NDC), the ruling NPP began to fret like an old lady with dry bones. Exactly how to deal with his imminent threat of deposing the incumbent Akufo-Addo has been a serious migraine for the party, especially in this election year. Strategy upon strategy failed to yield any results as the former President keeps surviving the onslaughts with ease.

The main strategy of the NPP was to deploy ‘robots’ to incessantly obsess themselves with bastardising the former President to make him unattractive to the Ghanaian electorate. They were led by the self-discrediting Vice President Mahamadu Bawumia. The NPP’s Communication Director, Buabeng Asamoah was drafted to complement them but has crush landed as he is not cut for the muddy job. He unintelligently strayed into trying to insult Mahama’s running mate, Prof. Jane Naana Opoku-Agyemang. The severe backlash he received from the public coerced him to coil back disgracefully.

On social and other media, the plan has been to black-wash the former President deeply with lies and everything he does not represent. So-called celebrities were employed to join the band wagon to no avail. The whole exercise turned into confusion as the former President successfully weathered the severe storm against him and blew the NPP away.

The first blow he dealt the NPP was the overwhelming endorsement of the NDC faithful to present him as flagbearer for the party in the upcoming general elections. As the bastardisation increased after his election, he delivered a heavy punch by announcing the impeccable Prof. Jane Naana Opoku-Agyemang as his running mate. This historically rare occurrence of choosing a woman mesmerised the NPP so much so that they failed to meditate before unleashing a stupendous attack on her, which immediately evaporated as society descended heavily on that madness. The surprise choice, Prof. Opoku-Agyemang overpowered the propaganda machinery of the ruling party and pushed it into silence.

Having nothing left to try against the former President, the NPP tried to hoodwink Ghanaians with a shambolic manifesto, whose launch at Cape Coast turned into a fiasco as the President and his Vice sang opposing songs from the same lyrics in their one manifesto. That comedy did not impress Ghanaians. Less than a month later Mahama launched the People’s Manifesto to banish the NPP’s manifesto into the dustbin. So popular was the People’s Manifesto that it became the reference point for the government against its own.

Akufo-Addo and the NPP in their confusion could not think of policies anymore. They began falling on Mahama’s policies in the NDC’s manifesto. The moment Mahama announced he would pay depositors of collapsed financial institutions within a year of coming to office, the government quickly found money to pay cash when it had already began processes to pay them through bonds after five years. Mahama again promised to cancel the law banning the importation of salvaged vehicles, the government was forced to suspend its implementation which was due this month.

The controversial debate over motorbike transport, (‘Okada’) in the country was generated by the NDC flagbearer’s decision to legalise and regulate the trade as it has entrenched itself as a major player in the economy. The government of Akufo-Addo played ostrich with the issues. When they realised it was gaining public support they started engaging the ‘Okada’ riders in secret promising to support them if they win again. John Peter Amewu, the Energy Minister, is reported to be sharing ‘Okada’ helmets in the night in his constituency. Sammy Awuku, the NPP’s National Organizer, has recently met ‘Okada’ riders at the Kwame Nkrumah Circle giving them hope of permitting their business. The party itself is reported to be procuring large numbers of ‘Okad’a for its supporters across the country.

Prior to the manifesto launch, Mahama was a great source of ideas for  tackling the social impact of Covid-19 on Ghanaians. He was the one who suggested to the government to offer free water and electricity to all citizens. The government has secretly commenced compiling apprentices names at Abossey Okai to implement Mahama’s National Apprenticeship Programme (NAP) outlined in the People’s Manifesto. The Luxury Vehicle Tax was cancelled at the instance of the former President. Mahama’s resolve to throw out the Tertiary Institutions’ Bill by this government was behind its suspension. A serious government that thinks through bills will not be suspending them as if they were wishful thinking.

These U-turns forced by John Mahama on the Akufo-Addo, NPP and their government has exposed the worrying super incompetence of the incumbent government in this critical election year. The electorate have taken serious note of the situation and have clearly aligned to vote for John Mahama as Ghana’s next President. These showed in many online polls recently which indicated victory for the NDC. The developments are now a major source of worry for the NPP and the government, compelling them to engage in dubious sods-cutting everywhere without funding for projects not meant to be done this year. Indeed, Mahama-fear has gripped Akufo-Addo and the NPP, and December 7 will only make matters worse for them!