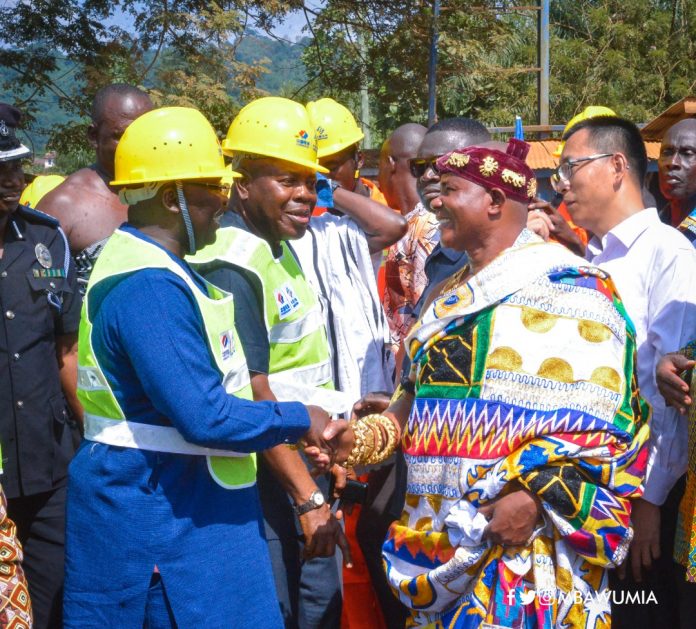 Ghanaian Vice President Dr Mahamudu Bawumia has strongly rejected attempts by the NDC to accuse the Akufo-Addo administration of neglecting the infrastructure needs of the people of the Volta and Oti Regions, especially in the area of roads, following an oversight in the summary of the 2020 budget.

Describing the erstwhile government’s record in the provision of roads as “very embarrassing”, Dr. Bawumia challenged the NDC to provide evidence of such neglect, as well as show Ghanaians where the many beautifully drawn pictures of roads in their Green Book could be found.

The Vice President threw the challenge on Tuesday, 19th November, 2019 when he broke ground at Jasikan for construction works on the 88 kilometre Hohoe-Jasikan-Dodo Pepesu stretch of the Eastern Corridor Road to formally commence.

Known as the N2 National Route, portions of the Eastern Corridor road, which begins from the Tema Motorway through to the Volta, Oti, Northern, North East and Upper East regions to neighbouring Burkina Faso have a long and painful history of neglect under the erstwhile government.

The Jasikan-Dodo Pepesu Project forms part of Phase 1 of the $2billion Government of Ghana/Sinohydro Master Project Agreement, and is expected to be completed in 30 months.

Addressing the chiefs and people of the Oti Region, Dr Bawumia said when it assumed office, the Akufo-Addo administration was confronted with the reality that the NDC had misled Ghanaians on the extent of work done in the roads sector.

“Contrary to all the nice pictures in the Green Book, we realised that the reality on the ground was very different. For eight years of the previous NDC government, they did not pay much attention to Volta or Oti roads. For eight years. But today they want to tell us they care more about Volta and Oti than we (NPP) do. Eight years. They accomplished very little.

“We identified these roads more than two years ago and said we were going to do these roads. And the Minister for Finance in the budget mentioned specifically that we are going to do Hohoe-Jasikan-Dodo Pepesu road. And this is what we are seeing today. We are seeing that Hohoe-Jasikan is being done as we speak today, and Jasikan-Dodo Pepesu is being done.

“What is very interesting, and what the country should know is that, through the efforts of the Minister for Roads, Hon Kwesi Amoako Atta, the contractors for Hohoe-Jasikan and Jasikan-Dodo Pepesu were mobilised and on site two weeks before the budget statement of Hon Ken Ofori-Atta. Two weeks before the budget they had already mobilised to site. So how can you ignore a region by mobilising for the construction of their roads?

“Another point. Of all the roads that were listed under critical roads in the budget, the only roads that have started are the Hohoe-Jasikan and Jasikan-Dodo Pepesu. They are the only two. All the others that have been listed are still under procurement. So how can you even think that we have ignored Volta region when it is the one that is starting, before anybody else?

“The NDC, I’m sure they are very embarrassed by their record. Very embarrassed, because it is an embarrassing record, if the truth is to be told. They claimed they had fixed so many roads in the country, but today there are demonstrations everywhere across all the regions for more and more roads. In their eight years they didn’t fix one major road in Upper East region. Not one. In their eight years in office, not one major road in Upper West region did they complete. Not one. So should these regions also say you have ignored them completely, wouldn’t they be justified?

The Vice President laughed off claims by NDC legislators and party activists that the Volta region has been overlooked in the 2020 Budget statement.

“When the budget was read, even though in the budget you could see mention of roads in many regions and in the Volta region the dualisation of the Ho town roads, construction of Ho bypass, Dufor-Adidome road, Asutsuare-Aveyime road, upgrading of Klefe town roads, Akatsi town roads, Ketu South area roads, upgrading of selected Kpando Municipality roads and Ketu North roads. All of these were in the budget. But after the Budget we were being told that we have ignored Volta region.

“If only they took their time to read the budget! But they don’t like reading. They like propaganda. They like to knock our heads against each other. They like tribalism. They like division. Under Nana Addo Dankwa Akufo-Addo this country is going to be governed as a united country. No region will be overlooked. That is why we have policies like one constituency one ambulance,  one district one factory, one district one warehouse, one village one dam, water for all, toilets for all, and free SHS for all, to ensure inclusion of all”.

Five Things COVID-19 Has Taught Me