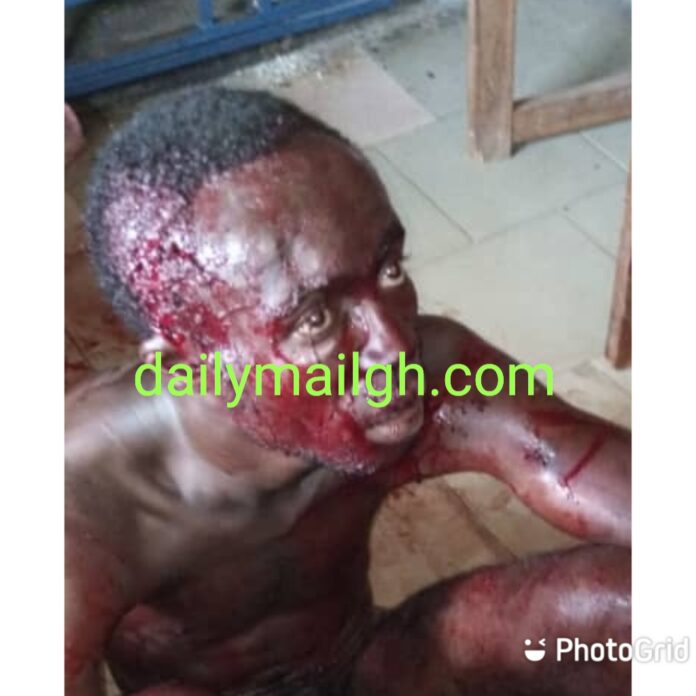 Police officers spent hours to fend off a mob baying to lynch a man suspected of kidnapping in the Offinso South Municipal town of Abofour on Thursday, June 10.

“It was a charged atmosphere”, said 24-year-old Millicent Agyare who had rushed to the scene closed to the Abofour market.

Residents turned into a mob as they subjected the 27-year-old man who was rescued by armed police officers after hours of standoff.

He had been assaulted, spotting several bruises after he was accused of attempting to escape with the two young girls whose names have been identified by the police.

A woman who works with the Evans Saw Mill, raised an alarm said: “I heard a loud noise from a young child and so I became suspicious and so I decided to find out. So as I inquired from the children of their mission in the bush the gentleman emerged and suddenly bolted.

He was given a hot chase by the townfolks and got him arrested”.

The suspect, who has been named as Kwaku Boahen, is currently receiving treatment at the St. Patrick’s Hospital, according to the Offinso Divisional Police Command which confirmed the incident to dailymailgh.com.

“Suspect who was severely beaten by his captives sustained various degrees of injuries… He is currently under police guard responding to treatment”, said Chief Superintendent Benedict Wonkyi, the Offinso Divisional Police Commander.

“Investigations has commenced into the matter”, he added.

The Offinso Municipality has grown sensitive to children’s welfare and criminal ways following the unresolved kidnapping and murder of a 4-year-old girl last month.

The disappearance of a four-year-old boy has raised concerns about safety of residents.

Residents want the police to step up security in the area.