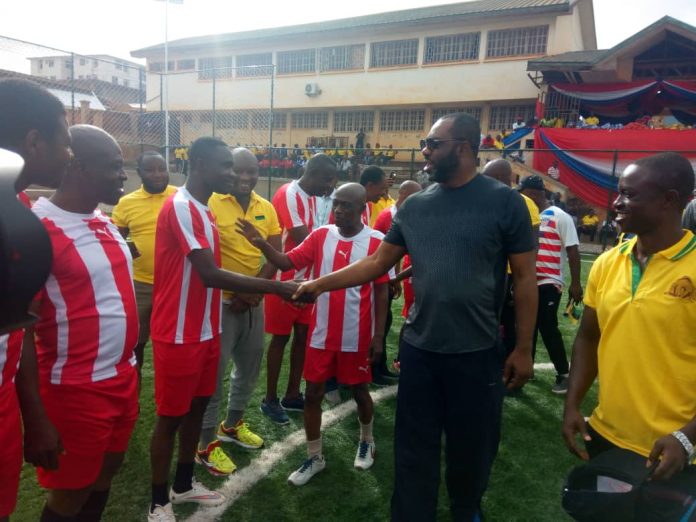 An ultra-modern synthetic pitch has been installed at Abbey’s Park, a popular recreational pitch in Kumasi.

Located in the Manhyia South Constituency, it is hoped that the pitch will be a hub for sporting activities and promote healthier lifestyles.

The facility was financed by Member of Parliament for the area and Education Minister, Dr. Matthew Opoku Prempeh, aka Napo.

Speaking at the event Dr. Opoku-Prempeh said the facility will encourage cross community relations in the area.

Napo also wants his constituency, which has produced most of Ghana’s top-notch football players in the past, to continue churning out more.

“…It’s the first time we have allowed the constituents to have a feel of the park and I think it has been encouraging… Certainly Ashtown has seen many stars but our park was nothing to write home about and we hope that while the whole world football is moving towards astro turf we would look for more sponsors to build more. Manhyia has been contributing its quota towards Ghana football and we hope to do more of such”, the MP said.

He also announced that plans are far afoot to construct similar Astro turf facility at Potia and Dichemso, both located in the constituency.

Elated residents who spoke to Dailymailgh.com showered tons of praises on Napo for being a development-oriented leader.

A football match which was organized on the pitch brought together various youth groups from the constituency.

Players from Dichemso who won the match took home a trophy and a cash prize of GHC800.00.

‘This is the most difficult part of my young career’ –...

Security beefed up at Asokore-Mampong after Canadian kidnapping