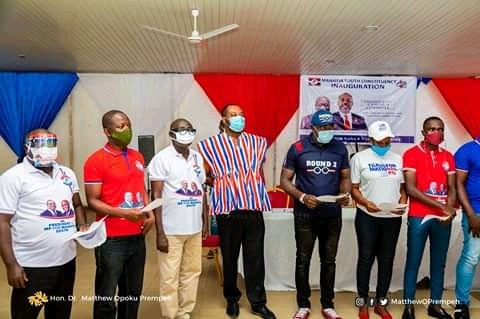 Members of the ruling New Patriotic Party (NPP) in the Manhyia South Constituency on Sunday, August 30, unveiled their campaign team ahead of the 2020 polls.

Already, identifiable groups have begun a massive house-to-house campaign targeting over 90 percent of voters in the constituency.

Speaking at the event, MP for the area, Dr. Matthew Opoku Prempeh —who is seeking re-election — urged party members to keep the team in place for four more years for President Akufo-Addo as well.

“My primary aim is to galvanize the residents within Manhyia who vote in Manhyia South to come out and vote for the party”, the lawmaker said in an interview with the media.

For him, the only way to retain the seat is to tout the government’s achievements to Ghanaians since it assumed office in 2017.

Citing the Free SHS, Planting for Food and Jobs, 1 District, 1 Factory, among others, Napo, as he is affectionately called, said such policies continue to change the lives of many Ghanaians positively.

He has therefore charged party members to unite and campaign assiduously to help renew President Akufo-Addo’s mandate for him to continue to lead the country on the path to prosperity.

The Ashanti Regional Organizer of the NPP, Francis Adomako who was at the event urged the team to remain focused to secure a resounding victory for the party, describing the opposition National Democratic Congress as a “scary alternative”.

Mr. Adomako stressed that the party is targeting more voters, especially the youth as it adopts its massive social media campaign ahead of the polls.

The event brought together key members of the party amid COVID-19 safety protocols.

The 30-member campaign team was sworn in by the Ashanti Regional Deputy Youth Organizer, Yahaya Salifu.

Radio in Ghana: from mouthpiece of coup plotters to giving voice...

RTI Law is a game changer in corruption fight – Bawumia