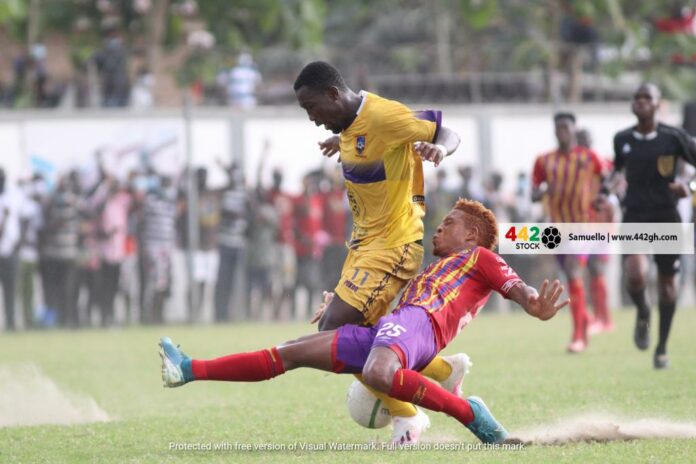 Medeama inflicted a painful defeat on Hearts of Oak by a lone goal in the 2020-21 Ghana Premier League week 12 clash at the Akoon Park in Tarkwa on Thursday.

The opening 15 minutes of the match was a ding-dong affair with both clubs exhibiting some fine football and created few openings in the highly competitive and contested encounter.

Medeama’s forward play was easily dealt with by the defensive players of Hearts of Oak while the Phobians attack failed to glitter as the first half ended 0-0.

Five minutes after the break, the home team were awarded a free-kick on the left side of attack and Agyenim Boateng’s cross was tapped in by Justice Blay to score the only goal of the match to snatch the win for Medeama.

The Phobians are without a win in three games and has suffered two consecutive defeats for the first time this season in the Ghana Premier League.

Medeama on the other hand got their third successive home win this season to move above the Phobians on the league table and will travel to Techiman to play King Faisal FC in their next game.

Hearts of Oak will continue with the search for their first win in three games when they play Legon Cities at the Accra Sports Stadium this weekend.