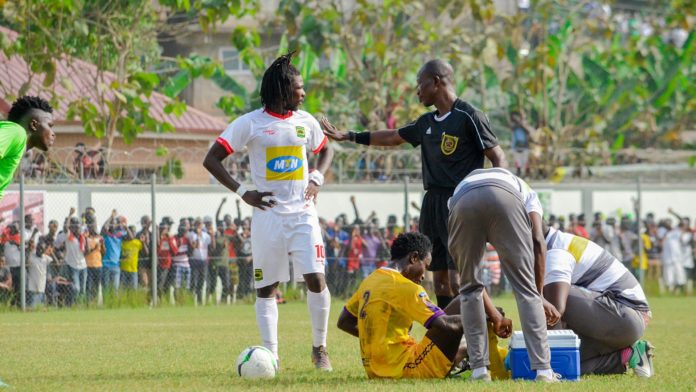 Ghana’s Premier League week four kicked into action on Wednesday with the top liner being a game between Medeama and Asante Kotoko.

The home team started the game on a high and were awarded a penalty just after a minute of action.

In-form striker Prince Opoku converted from the spot to give the host a perfect start to the game.

Both sides could not find the back of the net after the early goal as the first half ended 1-0 to the home.

Fifteen minutes after recess, Kotoko’s Imoro Ibrahim was shown the exit after a second bookable offence to leave the visitors a goal and a man down.

Medeama remained resolute at the back and prevented the Porcupine Warriors from drawing level.

Medeama maintain their perfect home form this season by beating the two most glamorous clubs in Ghana.

The game finished 1-0 to the home side.

Kotoko’s defeat is their second consecutive one in the league after four games, losing to Berekum Chelsea on Sunday at the Kumasi Baba Yara Sports Stadium.

The Porcupines will welcome strugglers Ebusua Dwarfs on Sunday while Medeama travel to Dawu to face Dreams FC on match day five.

OPINION: The church and money laundering

KOTOKO – HEARTS: How to Keep Up the Numbers