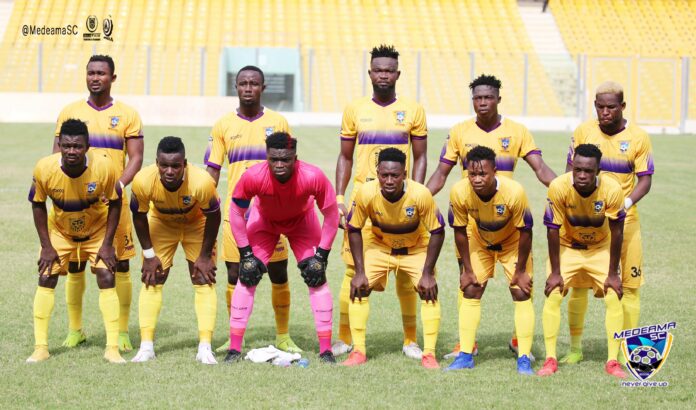 Tarkwa-based Medeama defeated Legon Cities in the Week-20 clash of the 2020-21 Ghana Premier League season in Tarkwa on Sunday.

The Yellow and Mauves who were without star players like striker Ahmed Toure and midfield-gem Rashid Nortey secured a vital win to keep chase at the top of the league table with a hard earned narrow win over the Royals.

Striker Prince Opoku Agyemang opened the scoring in the first half after just 23 minutes of play to make it 1-0 to the hosts to send the few fans at the park into ecstasy.

Just before the half time interval, Legon Cities FC defender Joseph Adjei unleashed a career-threatening tackle on the home team’s talisman, Justice Blay which resulted into an ankle injury as the visitors were reduced to 10 men after the horrible incident.

Ten minutes to the end of the match, Cities thought they had secured a point from the game with 10-men when Issaka Mohammed grabbed the equalizer.

Medeama, who had other ideas went in front in the game again when Kwasi Donsu scored the winner three minutes after the visitors’ equaliser in a game full of talking points to help Medeama carry the day with a 2-1 win and move to 4th on the table with 33 points.