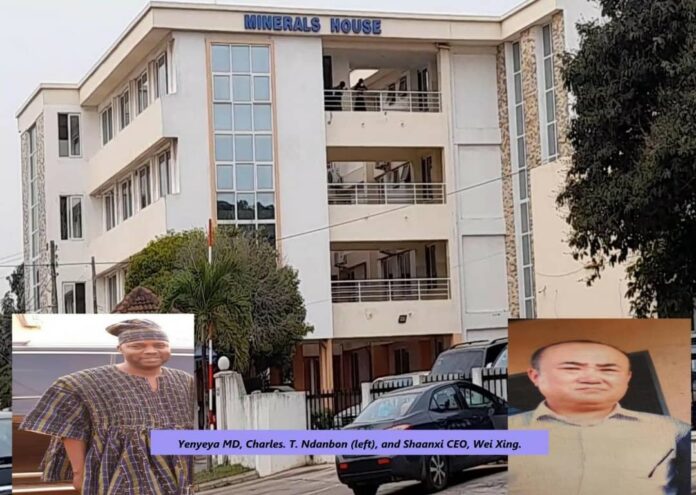 Although the notice was formally issued last month, the letter― dated 17th August, 2021― was intercepted by Starr News only on Wednesday.

Whilst the directive, which appears to have been kept under wraps until now, may prove to be the latest thorn in Shaanxi’s flesh, fresh reactions from a few who have also sighted the letter strongly suggest that there is even more action ahead against a company that has dominated headlines in the West African state for mining-related deaths and injuries for years.

Some opinion leaders, who say they want their names mentioned only when the promised action begins in front of media cameras, say they are going to mobilise people in Talensi, the district where the Chinese have been operating since 2008, to force the company out from the 50-acre piece of land if it delays further than allowed in checking out as ordered by the Commission. They did not mention when they would do it but they said it would not be done without notifying police.

“We refer to your company’s registration as a mine support service with the Minerals Commission. We note that your company has been providing contract mining services to Yenyeya Mining Group [now known as Yenyeya Mining Company] and Pubortaaba Mining Group which are located at Gbane in the Talensi District of the Upper East Region since 2009. In the period after 2012, the Minerals Commission continued to renew your company’s registration because of Regulation 2(3) of the Minerals and Mining (Support Services) Regulations, 2012 (L.I. 2174).

“Unfortunately, the Commission cannot continue to renew your company’s registration because of the coming into force of the Minerals and Mining (Local Content and Local Participation) Regulations, 2020 (L.I. 2431) which has reserved contract mining services for small-scale mining operations for Ghanaians. We are therefore by this letter withdrawing your registration as a mine support service company with effect from the date of this letter. You are advised to arrange to demobilise from the sites of the two small-scale mining licence holders with immediate effect,” says the one-page letter, signed by the Commission’s Acting Chief Executive Officer (CEO), Martin Kwaku Ayisi.

The letter dispatched to Shaanxi made it clear that the company’s registration as a mine support service provider was being withdrawn with effect from the very day the letter was written― 17th August, 2021.

The letter also directed the company to “demobilise from the sites…with immediate effect”. But ten days later, Shaanxi wrote to Yenyeya, informing its partner about the Commission’s directive, but giving a termination date different from what the Commission had stipulated.

“I have been directed by the Chief Executive Officer (CEO) of the Shaanxi Mining (Ghana) Limited to inform you in relation to the aforesaid subject matter [Withdrawal of Registration as a Mine Support Service Company]. Per the content of the letter we shall attach to this letter, by operation of law, our Mine Support Service to you which culminated in a contract dated 24th September, 2008, between the aforesaid company and your group, has been terminated.

“By reason of that, we wish to inform you that, by 1st September, 2021, we shall cease operation as providing Mine Support Service. The content of this letter does not however terminate any rights and obligations that existed between our company and your good self prior to the termination of the Mine Support Service. On behalf of the CEO, I thank you for the opportunity and cooperation that you accorded us during these years,” said the company’s Managing Director, Ryan Lee, in the letter, dated 27th August, 2021.

At present, Shaanxi and Yenyeya are locked in a serious legal battle at the High Court One in Bolgatanga, the Upper East regional capital. In 2008, the wealthy Chinese firm arrived in the district at Yenyeya’s invitation to render mine support service to its twin hosts, Yenyeya and Pubortaaba. Yenyeya and its foreign partner had worked closely since then until Shaanxi, after reportedly taking root in Ghana’s mining industry through the aid of some “powerful figures” in the country, announced a plan recently to go solo into a large-scale mining business.

Shaanxi intends to do the new business under a new name― “Earl International Group (GH) Gold Mining Limited”. And it is reported that the clash between the two partners erupted after Yenyeya’s Ghanaian-born Managing Director (MD), Charles Taleog Ndanbon, learned that the Chinese (his guests or ‘tenants’) had planned to acquire licence and permit for the sought-after large-scale mining business, to end their partnership with him and to take over his concession and some nearby concessions.

So, the Yenyeya boss headed to court. And in his Statement of Claim, he wants the court to declare that Shaanxi had breached the agreement it had with Yenyeya. He also wants the court to call for the appointment of “an independent professional auditor” to audit the “mining operations and other related activities” carried out from 2008 to date inside the Yenyeya Mining Company’s concession. And he wants the court to place “a perpetual injunction” stopping “Earl International Group (GH) Gold Mining Limited from doing “illegal mining and related activities” in his concession and from entering the concession until the case is over, among other reliefs.

Months ago, the lawyers for the Chinese company told Justice Charles Wilson Adjei’s High Court One that they wanted the matter settled outside the courtroom. The out-of-court settlement process, being facilitated by the Upper East Regional Minister, Stephen Yakubu, saw the representatives of the Chinese company absent in the first meeting, according to Yenyeya’s Public Relations Officer, Jarvis Avoka, in a press statement. The mediation efforts arrived at a decision in a subsequent meeting (the Chinese company represented this time) to have the company’s years-long activities independently audited. The two parties are scheduled to appear again in court on Tuesday October 12, 2021. But for now, it is Shaanxi who will be painstakingly rubbing the pain lodged in its neck by the Mineral Commission’s closure notice― and the action the opinion leaders have pledged.