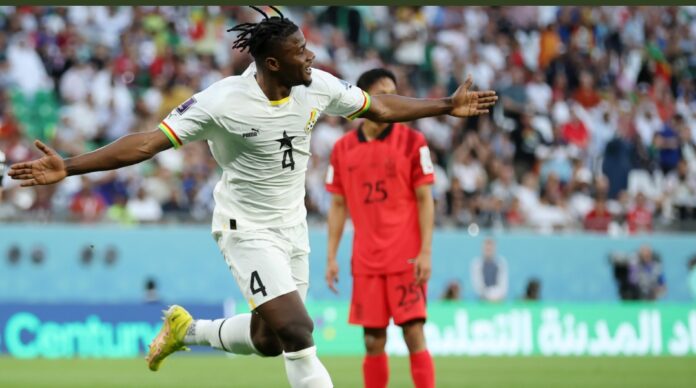 Mohammed Salisu made history on Monday afternoon at the Education City Stadium in Al Wakrah at the FIFA World Cup tournament in Qatar as he became the first defender to score for Ghana at the World Cup.

He pounced on a loose ball in the goal area to score Ghana’s first goal of the match against the Taegeuk Warriors of South Korea in Group H second round of matches.

“Mohammed Salisu has become the first defender to score for Ghana in World Cup history.”

His strike against the Asian powerhouse, South Korea sent him straight into the history books of Ghana as he became the first defender to score for the Black Stars at the FIFA Mundial.

He only played his second game at the World Cup stage for the west African country who are playing at their fourth FIFA World Cup tournament after their debut in 2006 in Germany where they reached the round of 16 stage only to be eliminated by Brazil.

His goal helped Ghana win 3-2 and now could go through to the next stage of the 2022 FIFA World Cup should they draw against Uruguay and South Korea fails to beat Portugal on Friday in the last group game.