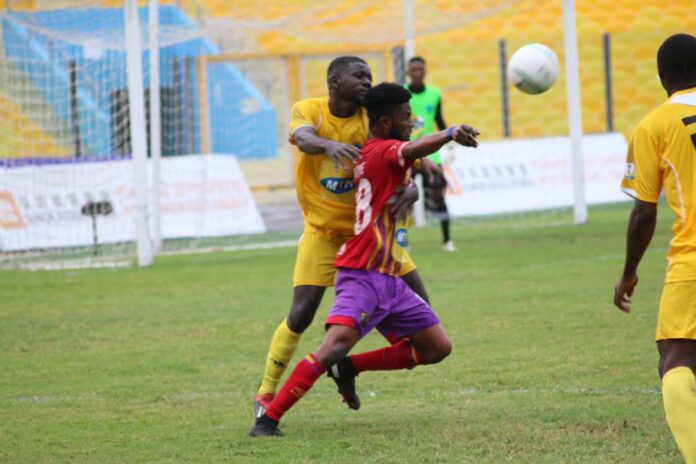 Accra Hearts of Oak SC thrashed lower tier side Windy Professionals to seal qualification into the round of 16 of the 2020-21 MTN FA CUP Competition.

The Phobians wasted numerous chances in the first half of the match and failed to hit the back of the net despite breaking down the defense of the Division Two side countless times.

Winger, Patrick Razak broke free on goal after a delightful pass from Emmanuel Nettey but the attacker failed to find the back of the net as he sent his effort wide despite having a yawning goal in front of him.

Striker, Kojo Obeng Jnr had three good chances which was difficult to miss than to score but the striker missed all those glaring chances

Daniel Afriyie Barnieh and Fatawu Mohammed also got chances to make amends for their colleagues but also failed to take the opportunities that came their way as the first half ended goalless.

Three minutes after the break, Barnieh struck from inside the box and got the opening goal of the match via a deflection to give the Rainbow Boys a perfect start to the second half.

Emmanuel Nettey scored to make it two to Hearts few minutes later but the visitors scored a quick one to reduce the deficit to one.

Highly-rated midfielder, Benjamin Afutu Kortey added to Hearts of Oak’s goals with a bullet header to make it 3-1 to the Phobians.

Substitute, Abdul Manaf Gumah added the icing on the cake goal to secure an emphatic 4-1 win for the Premier League leaders who cruised to a great win to book a place in the next stage of the competition.

The Phobians will on Thursday take on Legon Cities FC in the Ghana Premier League week 30 clash as their quest to end a decade of trophy drought continues with a tricky tie before playing Kotoko a week today at the Accra Sports Stadium.