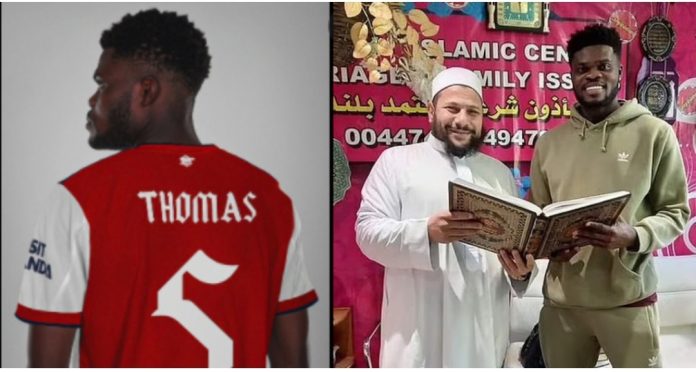 Arsenal midfielder Thomas Partey is now referred to as Yakubu after confirming he has changed his name following his marriage to Moroccan girlfriend Sara Bella.

The 28-year-old converted to Islam in March following his relationship with his girlfriend, and although he still remains Partey, he adopted the Muslim name Yakubu.

In a chat with Ghanaian journalist Nana Aba Anamoah, the Arsenal number star stated he is a Muslim and is now called Yakubu.

“I have a girl I love, I know my side chicks will leave me but it’s no problem,” he said.

“I grew up with Muslims so at the end of the day it’s the same thing. I’m already married and my Muslim name is Yakubu.”

The former Spanish La Liga side Atletico Madrid midfielder reportedly converted to Islam after months of studying the religion at his base in England.

Earlier this year, the Black Stars’ deputy captain was sighted, in photos posted on Twitter, with an Imam that suggested he had gladly accepted the religion.

COVID: Cambodian back from Ghana is country’s first Omicron case