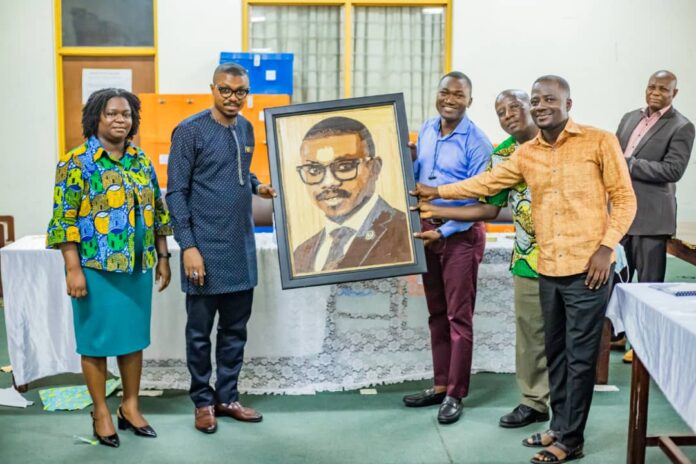 The acting Director General of the National Council for Curriculum and Assessment and MP-elect for Kwesimintsim Constituency, Dr Prince Hamid Armah, has bid farewell to the council ahead of his swearing-in on 7 January 2021.

Dr Armah, one of the country’s foremost experts in the field of education, first joined NaCCA as Deputy Executive Secretary in January 2019, before his appointment by President Akufo-Addo as Executive Secretary following the retirement of his predecessor in June of the same year.

During his tenure, he oversaw a root and branch overhaul of curriculum content, learning approaches and systems of assessment at the pre-tertiary levels of education in Ghana.

These reforms, including the introduction of the Common Core Programme, it is believed, will improve teaching and learning and equip Ghanaian children with the skills to perform meaningful roles in the economy.

Speaking to staff of the council at a brief ceremony on Tuesday 5 January 2021, Dr Armah recounted the achievements during his time at the helm of affairs, saying that, “while I leave with a heavy heart, I am nevertheless proud of what we have achieved in the relatively short time we have been in office.”

He added: “Through our concerted efforts, we were able to overhaul the national pre—tertiary curriculum as well as the systems of assessment, placing young Ghanaian learners in a much better position than we found them.

“We have conducted nation-wide training for teachers to equip them for the new paradigm ushered in by our reforms. And we have approved, with the highest standards of quality control, text books consistent with the features of the new curriculum.

“Above all, we leave the institution itself rejuvenated, able to face the challenges of modern institutions in its class and set to continue along the path of developing a system of learning that will produce a creative and innovative generation of thinkers, creators and leaders to take this country to its next level of development.”

Dr Armah said he had been exceptionally fortunate to benefit from the inspiring leadership of Dr Matthew Opoku Prempeh, the Minister of Education, under whose guidance the Council had achieved so much.

He expressed his gratitude to all the workers of NaCCA for the tremendous support they had given him during his tenure and said he hoped the same support will be given to his successor. The acting Director of Curriculum, Mr John Mensah Anang, will take over the position, albeit in an acting capacity, until a substantive appointment is made by President Akufo-Addo.

Professor Kwame Osei Kwarteng, chairman of the board of NaCCA, who also graced the occasion congratulated Dr Armah on his victory and wished him well, adding that he expected him to receive an appointment very soon. He entreated staff to remain united behind the new leadership and work closely together in the interest of the nation.

Dr Armah won the December parliamentary elections in Kwesimintsim on the ticket of the New Patriotic Party, making it impossible for him to continue as Director General of NaCCA. Prior to joining NaCCA, he was a lecturer at the University of Education, Winneba, and a consultant for several high profile international organisations. He is widely expected to join the government, as President Akufo-Addo reconstitutes his team for his second term administration.